MAP28: The Sewers (The Plutonia Experiment)

MAP28: The Sewers is the twenty-eighth map of The Plutonia Experiment. It was designed by Dario Casali and uses the music track "The Demons From Adrian's Pen" from Doom. The structure of the level is indeed reminiscent of underground sewer lines with damaging "sewage" seeping every which way. It is notable for being a rather large stage with a lot of strong enemies to fight. 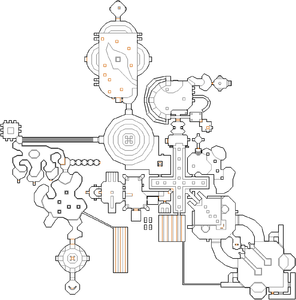 Map of The Sewers
Letters in italics refer to marked spots on the map. Sector, thing, and linedef numbers in boldface are secrets which count toward the end-of-level tally.

You begin on a ledge overlooking a large slime pit. Kill the shotgun guy on the other side of the pit. Move forward and turn to the east wall of the pit, and you should notice three windows. Each window has an imp in it - a rocket launcher shot into each window should do the trick. Once they have been dealt with, head south to the big door.

You are now in a long hallway, which is actually one arm of a cross-shaped hallway. Pick up a computer area map and continue forward to the intersection. At this point, you can choose whether to go for the red or yellow key first.

Head to the opening in the southeast of the intersection, and grab a radiation shielding suit from either alcove. As you continue forward, you will alert two chaingunners. Quickly kill them, then continue forward onto the slime. On Hurt me plenty (HMP) and above, there will be two barons of Hell in ambush positions next to the door, so make sure you are ready. Move up to the platform where the chaingunners were on and flip both switches, then drop down through the holes in the slime pool's walls.

There are two Hell knights at the bottom, and quite often two arachnotrons will move in from the next area. Kill them and proceed through the curved tunnels into the next area.

In this next large room, look for and kill the mancubi in cages - one in a cage on the north wall, one in a cage on the west wall. The two nukage channels in this room greatly hinder your movement, so take care not to be caught in a crossfire. Once they are dead, move to the southeast of the room where there is a silver door. As soon as you touch the silver door, two traps in the northeast and southwest of the room open, releasing a total of four (Hey, not too rough (HNTR) and below) or eight (HMP and above) mancubi. Quickly go through the metal door and collect the red keycard in this room, Use the two windows in this room to fire at the mancubi from a relatively safe vantage point.

Once this trap has been handled, head out of the silver door, back through the curved tunnels and proceed to the southeast of the room with the big slime pool. There is an unusual structure in a small room, which is actually a teleporter that will take you back up onto the slime pool. Exit this area and return to the intersection in the cross-shaped hallway.

Head to the southwest of the intersection. That corner is actually a lift, and will take you on a long ride down to a "library". Once you reach the bottom, flip the switch ahead and a wall will lower, revealing a corridor. Kill the demon ahead, wait for a Hell knight (HNTR and below), two Hell knights (HMP), or two Hell knights and a chaingunner (Ultra-Violence (UV) and above) to approach you, then dispose of them. Head through the corridor into a larger room, and prepare for a series of traps.

First, flip the switch ahead of you. This lowers parts of the wall ahead, as well as the "bookshelf" the switch is on. Fight off two imps (Hurt me plenty and below) or two imps and a chaingunner (UV and above). Re-lower the walls (if necessary) and proceed into the next room.

Next, flip the switch in the alcove with a medikit. This will lower three nearby bookshelves, releasing:

You do not have much space to move around here, so take the softer targets out fast before you get boxed in. Collect the yellow key from the lowered southern bookshelf.

Once this is done, go through either of the newly-opened paths besides the switch. On HMP, there are two Hell knights in this small room; on Ultra-Violence and above, there is an additional baron of Hell. Kill them and prepare to flip yet another switch, but before you flip the switch, prepare a BFG9000 (if available).

This switch is a trap, and lowers an arch-vile in an alcove. Quickly kill him before he resurrects any of the dead monsters, then flip the switch in the arch-vile's alcove. This lowers a pillar in the room where the three bookcases lowered. Flip this switch to reopen the parts of the wall that you used to enter this room.

Backtrack to the lift, and ride it back up to the intersection in the cross-shaped hallway.

Head to the western arm of the cross-shaped hallway and go through the doorway in the north wall. You will be in a room with a large circular "arena" and a red door. Open the red door and flip the switch behind it. This opens two doors in the north and west of the "arena", but also starts the "arena fight" by activating a large teleport trap.

A large number of monsters will begin teleporting into the centre of the arena. In total, on each difficulty, there are:

Since they all spawn in the middle of the arena, it is a simple matter of circle-strafing around them to dodge everything and kill everyone. Once they are all dead, head through the diamond-shaped passageway.

At the end of the passageway is a room with a large number of radiation suits in alcoves and a central platform with medikits and a plasma gun. Take a radiation suit, heal up and grab the plasma gun - you most certainly will need it later. If your suit starts to run out at any point during this next part, head back to this room to heal up and get a new suit.

Head south into a set of slime-filled caverns. Deal with the barons of Hell in the area. Ignore all the switches in the south of this area and head all the way east, where there is one more baron on dry land. Head through the wooden arches to a switch, and then head back out. A door in the south will have opened. Kill the two Hell knights and proceed forward.

This next cavern is populated by some arachnotrons in niches in the west, southwest and south of the room. Kill them and proceed into the southern niche, which leads you into the blue key room. However, before you enter the blue key room, get the plasma gun or BFG9000 ready.

Once you enter the blue key room, the floor will rise up behind you, trapping you in. When you pick up the key, a teleport trap is activated, but this one is far more dangerous than the previous one, as a larger number of monsters are teleporting to the edges of a far smaller room, surrounding you. In total, on each difficulty, there are:

An important thing to remember is that the Hell knights spawn on the eastern side of the room, and the demons spawn in the southwest of the room. Thus, on Hurt me plenty and below, the southwest corner is relatively safe; on Ultra-Violence and above, the north side is where the softest targets spawn, and you can get some breathing room by killing them first.

Once this dangerous trap has been defused, head south. There is a switch that re-lowers the floor, allowing you to leave, but do look behind the switch for a megasphere and an energy cell pack.

Backtrack all the way back to the big circular "arena", being wary of two mancubi just before the room with radiation suits.

From the "arena", head north. Collect some boxes of rockets, then open the blue door and ride the lift down.

As you step off the lift, a metal pillar will descend with a sole arch-vile. This arch-vile is going to teleport around the room eight times before being teleported to the central pedestal of the room. If the arch-vile decides to immolate you before teleporting to the pedestal, keen eyes and fast movement are going to be needed. Once the arch-vile is on the pedestal, carefully aim to take it down for good.

The eastern and western parts of this big room each have a box of rockets and an energy cell pack. The eastern set is safe to take. However, taking the western set will trigger six revenants to appear in alcoves in the southwest, northwest and northeast corners.

Head north and open the yellow door. Step into the exit teleporter to end the level.

* The vertex count without the effect of node building is 2119.