MAP28: The Spirit World is the twenty-eighth map of Doom II. It was designed by Sandy Petersen and uses the music track "Getting Too Tense". The par time is 7:00. 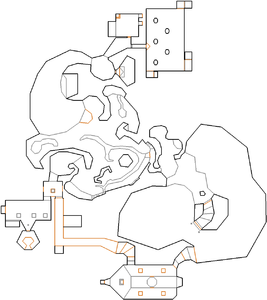 Map of The Spirit World
Letters in italics refer to marked spots on the map. Sector, thing, and linedef numbers in boldface are secrets which count toward the end-of-level tally.

At the start go towards the west opening and follow the hall down towards a large room with some isolated lava. In the east wall of the room you will see a small opening, big enough to go through it. Follow the narrow path towards a huge room with arachnotrons and one or two spiderdemons; incidentally, this is the only level designed by id Software that features more than one spiderdemon (on Hurt Me Plenty skill level and higher). Go towards the south side and run. Near the yellow key door, go to the south and climb the stairs to a room with pillars and a throne. Walk on the chair and back up to a platform that had lowered. Hit the north switch and get the yellow skull key behind a door.

Enter the yellow key door and grab the red skull key, which will trigger a revenant ambush. Immediately return to the large room with the small lava lakes. This time go to the southwest corner of the room and pass the false wall. You will be in a small room with a pillar at the center. Shoot the west wall and go through the newly opened door. Open the red key door and exit but watch out for the arch-viles beside the door.

In version 1.666 and earlier, there were only two deathmatch start spots, making this level unplayable in deathmatch mode.

The exit room contains three pits with a Hell knight and two revenants, which will all rise when you obtain the megasphere in this room. However, the revenants are not present on I'm Too Young To Die and Hey Not Too Rough, meaning that on those skill levels it is possible to fall into the empty pits and become unable to escape. The same problem can also arise if the player kills the enemy in one of pits and then falls down into them, before obtaining the megasphere and triggering the floors to rise.

Entering the chair room from the lava chamber opens a door hiding the arch-viles near the exit. If the door leading to the exit area is open at that point, the loose arch-viles will be alerted and set out to revive the enemies previously killed. The trap can be avoided by only opening the door to the exit area after retrieving the red key.