MAP28: Token Arch-Vile is the twenty-eighth map of Community Chest 3. It was designed by Rob Young (RjY), and contains no music.

The map contains no secrets, and the only skill variations are a few health and armor bonuses. Monsters, weapons, and ammo are the same at every difficulty. 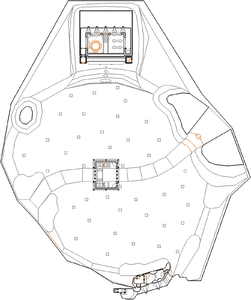 Map of Token Arch-Vile
Letters in italics refer to marked spots on the map. Sector, thing, and linedef numbers in boldface are secrets which count toward the end-of-level tally.

You start with an arch-vile directly in front of you. Unless you have weapons from a previous map, you'll want to immediately run to your right/east and through the small opening. Drop down and onto the berserk pack, then punch out the pink demons. Move forward and pick up the super shotgun. A door will open behind you; kill the monsters in there. Grab their shotgun and chaingun drops. When you step onto the ledge, the wall opens across from you. Kill the monsters in there, pick up the backpack, and press the lion-head switch. Watch out for the guys shooting at you through the window. Go back out into the passage, and you will find the bars at the end have opened. Step out and drop down onto the yellow skull key.

You will find yourself in an open grassy area. There is a nukage river running through the middle; don't fall in, as you won't be able to get out. There are some health and ammo pickups around the perimeter, and green armor in the northwest corner. As soon as you drop into this area, red pentagrams will appear all over the place. A moment later, hordes of monsters will begin teleporting in -- mostly imps, hell knights, and revenants. There's no real cover, so with limited weapons and ammo, your best bet is a lot of circle strafing and monster infighting.

At some point, make your way to the building in the middle of the nukage river. Press the yellow skull switch and the adjacent door will open. As you step through, monsters will instantly appear. Do not back-peddle out the door (see Bugs); stay in the room and fight your way forward. Go up and across the metal bridge, picking up the plasma rifle along the way, then down and out the door on the other side.

Cross the grass here to the north side. This side will be free of monsters for the moment; the ones on the other side will mostly remain there, but lost souls and projectiles can still get you. Go down, open the door on the right/east side, and step into the teleporter. You'll find a hallway that makes its way around a room in the middle, with monsters waiting around every corner. Go halfway down the hall to the door, open it, and take the stairs down. Pick up the rocket launcher and ammo, then press the blue skull switch. More monsters will teleport into the hall. Fight your way back up and continue to the end of the hall, where some bars will have opened. Go through, picking up the blue skull, and drop back down to the grassy area, where a new horde will teleport in on both sides. This wave includes cacodemons, mancubi, and arachnotrons.

Retrace your steps back to where you first got the yellow skull. A passage with stairs will have opened. Take said stairs up to the room that had the backpack. Fight some new monsters. Open the blue skull door. You'll find some teleport pads, a BFG, and, on easier skill levels, an invulnerability sphere. There's a red skull switch here, but you can't use it yet.

The red teleport will bring you to the cliff at the top of the nukage river, with the red skull directly in front of you. Grab it, but as soon as you take another step, you'll teleport again, back down to the grass on the north side. Four spider masterminds will teleport in to keep you company. Cross the building/bridge again so the four cyberdemons can join the fun. Take the same stairs to the backpack room again, and hit the red skull switch. The wall will open to reveal a silver teleport pad. Step onto it to telefrag the arch-vile. Walk up the steps to exit the map.

If you back out of the yellow-skull-key door before it closes (say, in response to the monster that appears right in front of you), and let it close, you cannot get back in again. This leaves the map unfinishable.