MAP28: Twilight Massacre is the twenty-eighth map of Speed of Doom. It was designed by Darkwave0000 and uses the Heretic E1M8 music track. 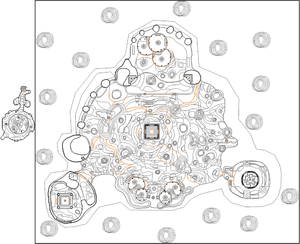 Map of Twilight Massacre
Letters in italics refer to marked spots on the map. Sector numbers in boldface are secrets which count toward the end-of-level tally.

Whenever you face the central tower that houses the end, it can cause some very heavy lagging.

* The vertex count without the effect of node building is 13870.

The complex architecture of this level and number of monsters causes performance problems in some source ports due to CPU cache usage, and has prompted some to change their internal architecture to support it.