MAP28: Unto the Cruel (PlayStation Doom)

MAP28: Unto the Cruel is the twenty-eighth level in the Ultimate Doom episode of the PlayStation and Sega Saturn versions of Doom. It is based on the original E4M8: Unto the Cruel, with modifications made to adapt the map to the consoles' limitations. The author of the original map is Shawn Green. 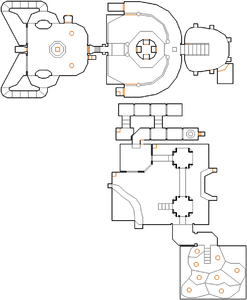 Map of Unto the Cruel
Letters in italics refer to marked spots on the map. Sector, thing, and linedef numbers in boldface are secrets which count toward the end-of-level tally.

Go down the staircase in front of you to a wall with a demonic face. Press the switch on your right to open the door, revealing an open area with a large central pillar and numerous monsters, mainly shotgun guys. Go through the door, turn right and follow the walkway to another demon face wall - open it to find a chamber with two boxes of rockets and the red skull key.

Leave the chamber and follow the walkway back, going all the way round to a third demonic face wall. Open it and step into the teleporter behind this wall to be taken to a new area. Head straight forward and climb the metal staircase, turn left and cross a bridge to a platform holding megaarmor, then turn left again to cross a bridge leading into a brick building. Press the switch on the north wall to lower a lift which will take you down to a wooden passage. Turn right and head straight forward past a staircase to pick up the yellow skull key, then go up the staircase you just passed, turn left and head down another staircase to a teleporter. Step into this teleporter to return to the area with the large central pillar.

The pillar has red and yellow skull bars on its north and south sides respectively - open these walls and press the switches behind them to raise a bridge to the west, and raise a staircase to the exit area. Follow the path you just created to reach an open wooden area containing four, seven or ten Hell knights depending on skill level. When they are all dead, the pillar in the center of the area will lower to reveal the exit teleporter.

The large pillar encountered early in the level also has alcoves in its east and west sides, indicated by walls with lion faces. Each alcove holds a medikit protected by a monster.

In the outdoor area with the blood river, climb the metal staircase and turn right. Cross the bridge and follow the passage with metal walls to a water-filled area with several marble columns, each holding a different pickup. The columns will lower when interacted with, allowing you to take a berserk pack, a box of bullets, a light amplification visor, a soulsphere, an energy cell pack and two boxes of shells.

After getting the yellow skull key, open the wall to the east of its platform between two red firesticks. This will reveal a teleporter leading to a ledge in the previous outdoor area. Follow the ledge round to find two boxes of bullets, two boxes of rockets and a partial invisibility powerup. The ledge also holds a chaingun in multiplayer games.

There are several items of interest in the exit area:

Inherited from the PC version: a cacodemon (thing 118) has no flags set for any of the three difficulty classes, so does not actually appear in the level. The two player starts (things 0 and 5) have no flags set either, but because of special handling in the engine, they function normally in the level.

Numerous changes exist in this level compared to the PC version.

* The vertex count without the effect of node building is 868.