MAP28: Whispering Shadows is the twenty-eighth map of Alien Vendetta. It was designed by Anders Johnsen and uses the music track "Sinister" from Doom. 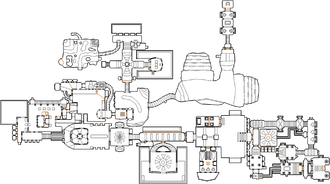 Map of Whispering Shadows
Letters in italics refer to marked spots on the map. Sector numbers in boldface are secrets which count toward the end-of-level tally.

Head straight into the building grabbing the super shotgun. Climb either staircase up, open the red wall, and go left at the junction. There will be a spider mastermind or a cyberdemon here depending on your difficulty setting. Get rid of the monster then jump out the window onto a red path with a rocket launcher and supplies. Head into the next structure and hit the switch here. Jump back out into the lava and go around it, to a newly-opened door. Through here, head down the steps to the wooden halls here. The small skull-marked doors here only contain chaingunners, so they are not too useful. Instead, grab the plasma gun here and jump out to a new open area. Head up the stairs here to the next room, where the next switch lowers a lift with an arch-vile on it. Up here, jump out the next window here to another open area. There are a number of monsters to contend with, just like the other open areas. Go up the stairs to the northwest, and then head east, being wary of some window traps. To lower the next lift, head out into the ledge in the open area, fending off either a number of revenants or a single cyberdemon depending on your difficulty, and press the switch here. Quickly run back to this lift, and ride it up to the next area, following the path all the way to the next switch. Press this to lower yet another lift and ride it up. Grab the BFG9000 to open the wall behind it to the next open area. You have two choices of travel here.

Go through the east part first. You will end up in a large valley with bloodfalls around you. Lots of cacodemons are on these bloodfalls. Find the entrance to the red building here and enter. You will see the yellow skull key sitting on a throne, but be careful of monsters teleporting in when you pick it up. Also look out for the swarm of revenants back in the valley.

Now go back and take the northern path. You will be in a cross-shaped area. Go to the right here to a switch, watching out for the trio of arch-viles. After pressing it, head back and there should be stairs leading north. Go up here, and you may notice that chaingunners will appear out of the blood pools. You can go through these. The right one leads to a secret, but the left one leads to where you want to go. Follow this bloody river to a small cavern. There are several monsters in here. Head to the far end of the cavern to find the blue skull key.

Now you need to backtrack a lot. Go back to the place where you had two choices, the one you accessed after grabbing the BFG, then head back down the lift using the switch. Go through the metal pillars here to lower them revealing barrels. Destroy them, then use them as an elevated platform to jump out the window here. There is a small tunnel in the blood where a Hell knight may be stationed at. Inside this tunnel is the yellow door. You will appear back in the lava-filled room. Head east here, and go through the teleporter you see. You will end up back near the hall past the red wall close to the start. Now head eastward to the blue door. Behind this door is a large, hellish yard with a marble fortress. Watch out for the cyberdemon hiding behind the wall here, and find a door to the north. Head through here, to a room with red closets in it. Approach the center one and all of them will simultaneously open, revealing chaingunners, an arch-vile, and the red skull key. Grab it, and if you want, head through the red door where the two caged revenants were for a soul sphere. Otherwise, go through the faceted wall into the marble fortress (the wall is an unmarked red door).

Here is another fork, and although you do have the yellow key, the faceted wall to your left will not open, so you should go right. Hit the switch to open the next hallway and use either switch to lower the lift. Ride it up and follow the path all the way to the east. There will be either a spider mastermind or a cyberdemon in this room with the switch, depending on the difficulty. Press the switch, and watch out for a duo of arch-viles behind you. Then, backtrack to the fork again. Go through the newly opened passage, following the path up the stairs and to the exit portal.

* The vertex count without the effect of node building is 5543.