MAP29: Anaemia is the twenty-ninth map of NOVA II. It was designed by Thomas Seifert (tourniquet) and Zachary Stephens (Ribbiks), and uses the music track "Unholy Voices," from Blood. 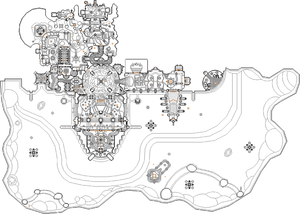 Map of Anaemia
Letters in italics refer to marked spots on the map. Sector numbers in boldface are secrets which count toward the end-of-level tally.

A revenant (Thing 111) in the northwest has no flags set for any of the three difficulty classes, so it does not actually appear in the level.

Teleport destination thing 355 is not flagged for Hey, Not Too Rough or lower. This corresponds to the arch-vile in a dummy sector which actually opens up the door past the three-key switch. The arch-vile, after opening the door for you, is supposed to teleport into the field after you sink into the area with four pillars, but will not appear on Hey, Not Too Rough or lower due to the respective teleport destination not being flagged properly.

* The vertex count without the effect of node building is 45618.