MAP29: Another Perfect Calamity is the twenty-ninth map of 32 in 24, a deathmatch megawad. It was designed by Ralph Vickers (Ralphis) and uses the music track " ".

It was the thirty-third map to be submitted, arriving eleven minutes before the 24-hour mark. 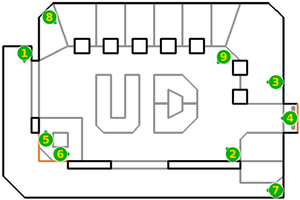 Map of Another Perfect Calamity 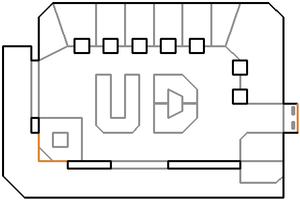 Map of Another Perfect Calamity

With an area of 1312x864 map units, Another Perfect Calamity is the smallest map in the WAD, though FP is only slightly larger even when accounting for its off-map sectors.

The map features a hallway with a blood floor running around the western and southern edges, and a staircase accessed from the north-west corner of the map covers the northern and eastern edges, with a chaingun at the north-east corner, and a small gap along the eastern wall which players can run across to reach the rocket launcher. The rocket launcher is on a ledge that drops down back into the blood hallway. In the south-west corner, there is a small alcove on the inside wall from which players can see the central room. Entering this alcove will lower the silver pillar it contains, which reveals the plasma gun. The central room contains only super shotguns for the spawn points, and a shotgun and a chaingun along the northern and eastern rim of the staircase respectively. In the middle of the room, the letters "UD" can be seen carved into the ceiling, referring to Unidoom, a clan founded by Ralphis.

The map contains no health or ammo.

This level contains nine spawn points, all but one of which is placed on top of a super shotgun.