MAP29: Atlatl is the twenty-ninth level of Plutonia: Revisited Community Project. It was designed by Brett Harrell (Mechadon), and uses the music track "They're Going to Get You," composed by Robert Prince for Doom. The par time defined in MAPINFO is 5:00. 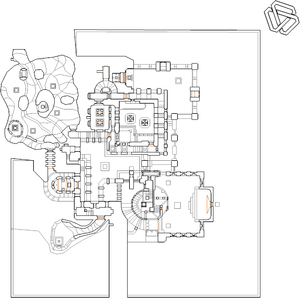 Map of Atlatl
Letters in italics refer to marked spots on the map. Sector, thing, and linedef numbers in boldface are secrets which count toward the end-of-level tally.

As soon as the player approaches one of the four medikits or the green armor in front of him (behind the yellow door), he triggers (Linedef 4061, Action: 19 - W1 Floor Lower to Highest Floor, Tag 35) a wall to rise in the south of that area, thus blocking the only retreating opportunity. Entering the eastern teleporter room and stepping on the teleporters triggers (Linedef 4059, Action: 38 - W1 Floor Lower to Lowest Floor, Tag 35) that wall to lower again.
The player does not need to cross any of those lines before he fights the monsters teleporting in, but both lines have to be triggered before exiting the map (linedef 4061 to approach the map exit and linedef 4059 to use the switch east of the teleporters to remove some bars blocking the map exit).
As the lines can triggered only once and it is possible to trigger the already lowered wall first to lower and then to rise, the player can lock himself in that area, unable to return to the rest of the map to collect remaining items.

* The vertex count without the effect of node building is 3961.

This level was built in about twelve hours spread across two weeks, using Doom Builder, SLADE 3, and XWE.