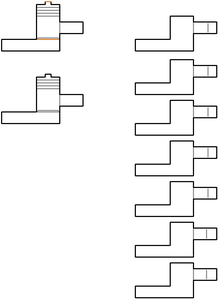 Map of Bambi's Mom is Dead
Letters in italics refer to marked spots on the map. Sector, thing, and linedef numbers in boldface are secrets which count toward the end-of-level tally.

The level primarily consists of an unskippable cutscene in which the protagonist confronts multiple zombiemen, who have kidnapped his family, and slaughters them with rockets. After grabbing the chaingun and watching the cutscene, you can kill the zombiemen and walk straight to the exit.

* The vertex count without the effect of node building is 136.