MAP29: Barbatos' Fortress is the twenty-ninth map of Interception. It was designed by Sebastian Graham (General Rainbow Bacon) and uses the music track "". The par time defined in MAPINFO is 5:00. 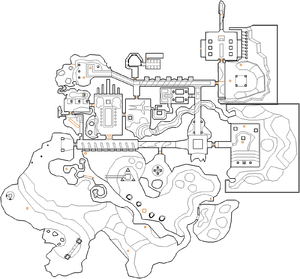 Map of Barbatos' Fortress
Letters in italics refer to marked spots on the map. Sector, thing, and linedef numbers in boldface are secrets which count toward the end-of-level tally.

Two cacodemons are stuck inside each other inside one of the pillars. They can still be taken out with careful aiming using the rocket launcher, while standing on the lava (make sure to grab the radiation suit first) in a certain spot for the autoaim to work. Additionally, four mancubi will never teleport into the map, preventing achieving 100% kills (except with arch-vile resurrections).