MAP29: Brutality (called Brutal on the TeamTNT website) is the twenty-ninth level of Icarus: Alien Vanguard, set somewhere on Beta Pictoris 3. It was designed by Mike Ruete and uses the music track "Brutality" by Jeremy Doyle. 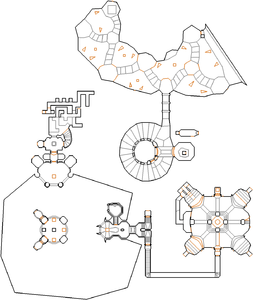 Map of Brutality
Letters in italics refer to marked spots on the map. Sector, thing, and linedef numbers in boldface are secrets which count toward the end-of-level tally.

Take the teleporter you see to be surrounded by shotgun guys. Open the next two doors watching out for more shotgun guys as well as chaingunners, then go through the path to the east to lower some stairs into a computer maze. Navigate it to a switch, then backtrack a tiny bit to see a wall has opened to the right. At the next fork, go left and press the switch at the very end, then leave the computer maze. At the top of the steps, you will find some new areas open with a Hell knight, a cacodemon, and two chaingunners. Go towards the switch in the new closet and press it, then take the two doors back to the teleporter. There are more monster closets open here; head into the northwest one to lower the teleporter.

With that down, a new area at the starting point is open with a baron of Hell inside. Press the switch behind him to lower into an area with another switch. Press this one and get past the moving door back to the lift. Now take the teleporter to the right to head into a tech hallway. At the fork, go left first, and open the door. Flip the switch and take the other path. Head all the way down this path to a lift with a baron of Hell on it. Take it up to a room with a lot of health and armor bonuses. Drop to the right and a wall will open with various monsters inside. Head towards the switch and flip it to raise some stairs to the next switch. After flipping it, the southwest corner will be open, with a similar amount of monsters. Press the switch near the southern bridge to lower it and cross over to the southwestern side. Do as you did with the southeast side, then run all the way through the openings to the northeastern side. Again, flip the switches here then cross to the northwest. Flip the switch there, then take either path to a switch, taking this path to the direct center of the room. Get the blue key from the zombieman, but do not stand there too long because a crusher will activate when you pick up the key. Now lower the northern bridge and open the blue door to teleport back to the starting point.

Again, another opening appears with a baron of Hell and a switch. Grab the red keycard and use the lift to downwards, then press the switch there. Return to the top and take the available teleporter on the right. This next area has several imps, cacodemons, and even a cyberdemon. On ground floor, there are blue and green arrows which act like teleporters to other parts of the ground floor. Use the lifts to reach the steps again. You need to press three switches here:

After you hit each one, head back to where you first teleported into this area to find a hall with imps. Look out for chaingunners on the balcony, Hell knights on the stairs, and lost souls from the middle as you descend the circular staircase leading down. At the end, open the metal wall to find a mancubus at the bottom of a large elevator. Press the switch to raise it up to the balcony where the chaingunners were located. Open the two metal walls, kill the cacodemon, and take the exit teleporter. Press the panel on the right to exit.