MAP29: Demolition is the twenty-ninth map of Going Down. It was designed by Cyriak Harris (mouldy), who also composed the music track, "Somebody Set Up Us The Bomb." 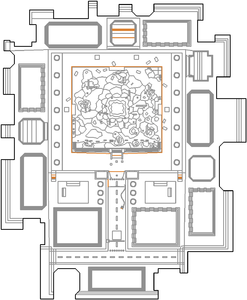 Map of Demolition
Letters in italics refer to marked spots on the map. Sector numbers in boldface are secrets which count toward the end-of-level tally.

The level begins with a familiar image, being back at the beginning in front of the tower. Press the button to blow up the many barrels in front of you and "demolish the building". This will reveal a large arena full of rubble, with a central tower made of several rungs, and a spider mastermind on top. Fight off the succeeding waves of pinkies (running around the map), revenants (teleport on the tower after you first fire on the pinkies), imps (teleport on two elevated platforms on the sides of the arena), and hitscanners (teleport in the arena) until you are alone with the spider mastermind. After enough damage, she will turn into a custom boss enemy, a more reddish spider mastermind that can fire mancubus fireballs and homing revenant missiles. At the same time, a swarm of cacodemons will begin to come in. If you are going for 100% kills, make sure the cacodemons are all dead, because the level ends immediately when she dies.

* The vertex count without the effect of node building is 4536.