MAP29: Dominion is the twenty-ninth level of Eternal Doom and was designed by Chris Couleur. 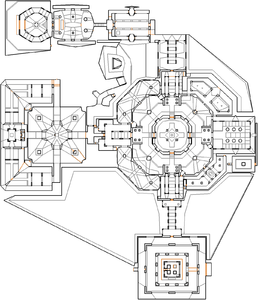 Map of Dominion
Letters in italics refer to marked spots on the map. Sector numbers in boldface are secrets which count toward the end-of-level tally.

You start in a big room surrounded by four buildings outside.

Exit this room through the south door (you will be attacked by imps, sergeants, cacodemons and Hell knights) and go upstairs in the room in front of you. When you reach the blue skull door, turn left and continue upstairs. You will reach a brown room with pillars in the middle, a Hell knight and a couple of cacodemons. Kill them, continue until you go up some stairs and go left until you reach a stone switch in the upper walkway. Hit this switch to reveal another one at the other end of this same walkway, along with a Hell knight. Take care of the knight and hit this other switch. Watch out because when you hit this second switch, several revenants will be released. Now go back, through the first stairs on your left and turn right. Stop next to the white/black "monk" figure and press it, so it will lower, but not all the way down. Now go back to the other walkway and look at this half-opened door from the other side. There is a blue skull visible from where you are standing. Shoot at it to activate it. This will lower the door all the way down, and will also reveal a chaingunner and an arch-vile. Once you get rid of them, go through the newly opened door and take the red keycard (there is also a rocket launcher out here). Come back through the door and go left.

Turn right on the hallway and follow it, you will see the red skull door to your right. Ignore it (you have the red keycard, not the red skull) and keep on straight, fighting a baron of Hell and some Hell knights, until you reach another brown room to your right, similar to the previous one. Run past this room, killing cacodemons and Hell knights, until you get to the other side. You will reach another set of stairs with green windows. Down the stairs is the red key door. Once you enter this door, go upstairs and follow the hallway to your right, until you find a bridge with buildings on the sides (with imps and Hell knights) and a door in the other end. You will notice that stone faces flank this bridge. The ones near the door are switches. Hit the one on the right to open the door and go through it, killing the imps on your way. Go down the stairs to a big room with water and two columns in the middle. As you enter here, two revenants will appear next to the pillars on the water, as well as two cacodemons. Turn around to your left and you will see a blue skull switch. Hit it to raise a bridge so you can cross to the other side (activating this switch will also cause some spectres and arachnotrons to teleport into the room). Go to the other door into a big circular room. Go down the stairs either way. The blue keycard is behind the central pillar, but you cannot get there yet. Instead, go outside the building and go left, until you see an eye switch guarded by a revenant. Hit this switch so the step at the entrance of the water area will lower, granting you access to the blue keycard. Be careful as you take it because there will be an arch-vile behind the pillar as well. Once you get it, go back to the main central courtyard and head all the way up to the building in the south side.

Go through the blue key door, up the stairs and through another door. Now you are a big hallway surrounding a brown tower in the middle, with fire on the top. There are also some imps, cacodemons, and a mancubus, as well as two revenants looking from outside the windows (unless you killed them before getting in here). The door where you came in is now locked, so you really need the yellow keycard to get out. Go to your right in the walkway and then around the corner go left. In the middle of the corridor, there is a switch to your left. Hit it and a wall will lower behind you, revealing shells, a medikit, rockets and a skull switch, which raises a bridge on the other side of the room. Once you are in the middle, hit the brown/grey wall in front of you to lower it, and go back to the other side of the building, until you reach a yellow skull switch and a lift. When you ride the lift up, you will reach a small room with four columns, inside one of which is the yellow keycard. The yellow skull switch lowers the column, revealing the keycard, but just for some seconds, so you have to lower the lift, and immediately before it starts rising again, hit the skull switch, so you will be able to kill the enemies (including an arch-vile) in your way and get the yellow card just in time. When you ride the lift down, you will notice several arachnotrons who teleported into the walkway around you. Kill them or go fast through the yellow door to exit this part.

By now you should have all three keycards, so you just need the red skull key. Go again into the main central courtyard and go to the building in the west, where the yellow door is. Now you will be in another courtyard, with four water areas, each one with a brown pillar in it. Notice the red skull key next to the brown pillar in the south-east water area. Go to the other side of the courtyard into a big room with a big brown wall and four columns surrounding a water area. There are some spectres, imps and a couple of Hell knights in here, so be careful. Once you are inside, turn around and look at the big brown wall. In the middle of it, there is the image of a hanged marine. Shoot at it to open two doors in the bottom, each one housing a revenant. An arch-vile will also appear in a pillar in the middle of the water area. There are also two switches inside the newly opened compartments. These switches lower a portion of the wall behind them, so when you push them you need to run to the lift before it rises again. The northern switch gives you access to a walkway with a sergeant and a revenant, as well as a mancubus in a pit, next to a couple of switches. The southern one houses some imps, and some revenants in its respective pit. Before you go into either of them, get into a walkway at the north of the water area where the arch-vile emerged. When you reach the end, turn left and you will see a switch. This switch lowers a wall on your left. Ride it up, kill the sergeants and Hell knights, and take the soul sphere up here (at some point, the pits in the aforementioned rooms will rise, disappearing, but I do not know what triggers this. It could be the switch that takes you to the soul sphere, or maybe taking the soul sphere itself, but I am not sure). Anyway, go back to the northern room (remember to hit the switch that lowers the wall) and hit the red switch. A wall in the back will open, revealing a teleporter (this teleporter gets you back to the entrance). Before you step into the teleporter, hit the switch next to it. Now get in the teleporter back to the entrance and ride the lift that the switch lowered. You are now in a small room with a chaingunner. There is also a switch on your right. Hit this switch to lower a lift on the other side of the room below (where you take the one that gets you here), take the lift down and run to the other side before the other one rises. Kill the chaingunner here too. At the other side of the room, there is a cage, with another image of a hanged marine. Shoot at it, and come back to the wall with the other hanged marine (the one you shoot first). Now hit the other switch (southern) and ride the wall behind. The door where the revenant was should now be open. Go into the teleporter inside. You will now be in the middle pillar of the courtyard (you may have seen a revenant here on your way in; if you have not kill him yet, he will be telefragged). Turn around and hit the red skull switch. This lowers a gate next to you, as well as a portion of the column in one of the water areas (south-eastern). Go into this water area (watch out for the revenants if you have not kill them yet), and fight two Hell knights. Once they are dead, hit the stone switch behind to lift the brown floor, so you can now access the pillar and get the red skull key. Once you get the key, a corner of the column will lower revealing a teleporter. This will take you once again to the entrance.

Go once again to the main central courtyard, and this time head on to the west room. Go upstairs and at the top, follow the hallway immediately to your left or right (depending on the side you choose to get up), and proceed through the red skull door. As you open this door, a couple of revenants will attack you in the small hallway. Once you take care of them, go right through the hallway and open the door at the end. You are now in the final room. Just kill the imps if you like, the pain elemental that will come out of the pit, and go through the door in the other end. In here, just kill the baron of Hell and step on the exit teleporter to finish the level.

* The vertex count without the effect of node building is 3113.