MAP29: Dust to Dust is the second-to-final level of Erik Alm's Scythe 2. Its music track is "Pestis Cruento" by Daniel Bernstein, taken from Blood. 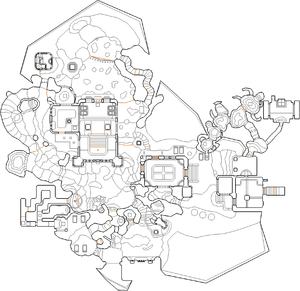 Map of Dust to Dust
Letters in italics refer to marked spots on the map. Sector numbers in boldface are secrets which count toward the end-of-level tally.

Unlike many other maps of the megawad, the monster count here is only moderate, but it manages to still be very challenging. There is a lot of damaging lava to trek through. The environment is hellish, with a hint of medieval. The music is quiet but sinister and that sets the tone for the atmosphere.

At the start, go straight ahead up the stairs and climb the stairs to your left as well. Approach the enclosed stone structure in front and drop down to the molten rock below. Go forward and make a hairpin turn to the right to spot the yellow key on a pillar. Flip the switch on the left to lower the pillar, then grab the key and return to the entrance of this area. Ride the lift up and open the yellow door in front, slightly to the right. Press the switch inside then exit this room and go through the lowered yellow bars to your left.

Use the switch and look slightly to the left to see a wall lowering near the starting area. Drop down, make your way to it and flip the switch inside. Turn around, go to the right and you should see a wall lowering in front, revealing a new area. Follow the path, go up the stairway to your left and jump across the gap. Continue through the various rooms until you reach a switch. Press the switch, then backtrack in the direction of the previous switch but approach the blue door as you see it instead.

To the left is a new area, so follow the path until you see a chapel on the left side. Enter it and make your way to the red key pillar to lower it, then collect the key. Bars will lower by the entrance, locking you inside for 30 seconds. Fend off the hellspawn, exit the chapel when the bars have raised and go to the left to find the red door. Open it and go up the staircase to find a switch. Use it, retrace your steps to the entrance of the chapel and drop down to the lower ground in front.

The blue key pillar will lower, so pick up the key and go up the stairs to your right. Follow the little platforms to another set of stairs leading to a blue door. Go through it, then open the blue door to the left to arrive at an outside area. Go down the stairs and inspect the graves to your left: the right one has a hole instead of a cross, so drop down to arrive at a cavern. Follow the platforms in the middle of the lava flow until you spot a switch inside an alcove on the left. Flip it, return to the last platform and go through the passage on the left. In the grassy area that follows, press the switch in front, slightly to the right. Drop into the molten rock to your right and escape through the stairs to the left. Go forward, up the stairs to the left and go through the opened door to spot a door in front, slightly to the left. Go through this door to exit the level.

* The vertex count without the effect of node building is 5749.