MAP29: Event Horizon is the twenty-ninth map of Community Chest 2. It was designed by Boris Iwanski. 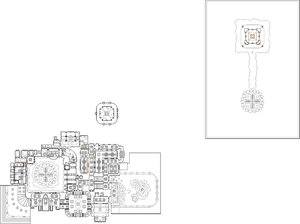 Map of Event Horizon
Letters in italics refer to marked spots on the map. Sector, thing, and linedef numbers in boldface are secrets which count toward the end-of-level tally.

Enter through the door and you will see a large rocky structure. Take the lift down to ground floor. Go to your left and enter through the open doors, following the path to the switch. This switch opens up a door on a balcony to the north of the large courtyard. Enter the teleporter in this area. You will be surrounded in a marble area with cacodemons and imps. Enter either teleporter in the blood to be whisked behind the hellish opening. Do not take the teleporter here unless you want to go back to the courtyard, instead move down the halls until you come to a three-way fork. Go straight down the path with the lone arachnotron in it. Go through this door and turn left and in this room with the cacodemons, press the eye switch. This shapeshifts the blue floors into blood, and if you go back a bit, you will find one hallway has been deteriorated revealing an outside area with nukage, Hell knights, and the blue keycard which you cannot access yet. Furthermore, the area where you teleported into is now flooded with blood, allowing access to the switch you could not reach earlier. Press it and go through the teleporter.

On the other side, a passage to your left has opened; go through it. Climb the stairs and flip this switch to trigger an lift behind you, which leads to the red key, as well as the yellow key if you can find it for secret #3. Go through the door that opens next to the red key and straight east pressing the red switch. Follow the path up, and find a door around the bend that leads to a control room. Press all four switches, this will open the barred door up ahead. You will be able to go outside again and grab the blue keycard. Take the right door once you grab the card, and head to the three-way fork. Go on the left path, and you should be in a room with spectres and arachnotrons. Pressing the blue key switch here reveals two cyberdemons and the red skull key. It also opens up a passage leading to a multi-eyed monster. Press on its eyes to "damage" it a bit. Then, head into the courtyard and through the west door. Climb the north stairs and take the door immediately to your left. If you pressed the blue switch, the bars here should be gone now, so go down the hall and press the switch at the end to open a nearby door. Head back and through this door following the path around to the other side of the multi-eyed monster. Press on its eyes again and the rocky structure in the middle of the courtyard will lower, revealing a teleporter in the very middle.

Enter it, and you will be whisked to a hellish section with a temple in the distance. Go there and you will find the blue skull key. The walls will trap you in and the switch on the blue key pedestal will cause your platform to rise. Fight monsters until you reach the top. At the very top, grab the key, and notice several portals. Take the one with that is bluish and red in color to return to the outside of the temple, and teleport back to the courtyard. Now you need to head back to the slimy area where you got the blue keycard, and on the highest possible floor are two daises with blue skull and red skull markings. Place the keys there and two pentagram walls will rise. Be careful as a lot of strong monsters will attack you at this point. You will then be able to exit.

* The vertex count without the effect of node building is 12581.

One voodoo doll (player 1 Thing 4) has no flags set for any of the three difficulty classes, but because of special handling in the engine, it functions normally in the level.