MAP29: Extorta Nova is the twenty-ninth map of NOVA: The Birth. It was designed by Paul Stasiuk (fiend-o-hell) and Memfis, and uses the music track "Castle Cimmeria," originally composed for Lands of Lore: The Throne of Chaos. 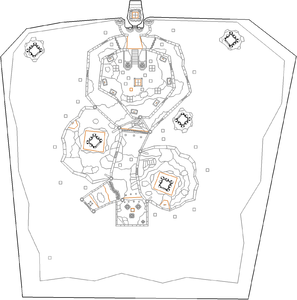 Map of Extorta Nova
Letters in italics refer to marked spots on the map. Sector, thing, and linedef numbers in boldface are secrets which count toward the end-of-level tally.

Five imps will not teleport into the map on Hey, Not Too Rough or lower because their teleport destinations are not flagged for those skill settings.

* The vertex count without the effect of node building is 5457.