MAP29: Fire Walk With Me is the twenty-ninth map of Alien Vendetta. It was designed by Anders Johnsen and uses the music track of Heretic's E1M4: The Guard Tower.

This level shares the title of the David Lynch film Fire Walk With Me. 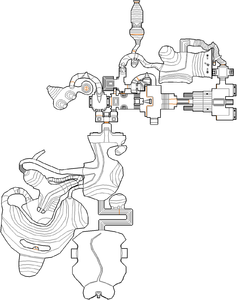 Map of Fire Walk With Me
Letters in italics refer to marked spots on the map. Sector numbers in boldface are secrets which count toward the end-of-level tally.

Carefully traverse the thin path at the start, then follow the cavern. A section of the wall will lower along the way revealing monsters and a super shotgun. Continue until you reach a large rocky exterior area. The fortress' door requires a yellow key, so grab the plasma gun in the cave right next to entrance for now. Then, find an opening in the lava leading downward. Grab the megasphere and drop down, and you will find yourself in a crescent-shaped chamber with many revenants on the inside bend. When you can, head behind the structure on the big bend of the crescent and find the switch here. Look out for a group of mancubi behind you, then go to the other end of the crescent to find an open passage and some arch-viles. Follow this passage through some monster-filled islands, then climb up to solid ground. A cyberdemon will ambush you from the left, and up on the mountains to the right where imps are, you will see the yellow skull key. Find a small opening with an arch-vile in it, and climb up until you grab the key. After grabbing it, drop down and go to the lava pool where the cyberdemon is to climb up the lava fall. Kill the lost souls and return to the rocky exterior. With the yellow key you can enter the red fortress up ahead.

Inside you will immediately be at a fork. Go left first, and you will see a large serpent with its mouth wide open. Go through it, but watch out for arch-viles who will teleport in as you enter. Traverse the innards of the serpent until you come to a big room where the red skull key will be on your left. Head to it for its pillar to lower and grab the key. Look out for the monsters in the room as you exit. Go back to the fork, where you will be greeted by arch-viles as you take the second path. Go through the arches here, and when you reach the blood, lots of chaingunners will teleport on the steps in front of you. Fend them off as much as you can, but you will be back here later, so head north through the blood river. Open the red bars here and continue. There is a supply room to the left if you need it, but when you go through the next area, monster will teleport to the open space in front of you, so be prepared for them. When they are done, examine the ruined marble blocks and find a way through the hole here. Follow this lava river, ignoring the blue bars to another open area with hanged imps and a mountain of chaingunners. Keep going down the lava river, then up the rocky staircase to some bars which you can open directly. Through the next few halls will be an assortment of monsters including a spider mastermind. Fall down to the west here and go through the bloodfall to find the blue skull key. The cage with barons of Hell will open when you pick it up though. Go through the blood river again, making your way back to the blue bars you passed earlier. Watch out for the arch-viles nearby, then open the blue bars. The double doors here will automatically open and a cyberdemon will guard a distinct portal which is the level exit.

MAP29: Fire Walk with Me at the Doomed Speed Demos Archive

* The vertex count without the effect of node building is 3293.