MAP29: For We Are Many is the twenty-ninth map of Community Chest 3. It was designed by Matt Tropiano, and uses the Rise of the Triad music track "Mist Ache" by Lee Jackson.

For We Are Many was featured in Doomworld's Top 100 Most Memorable Maps, placing 72nd. 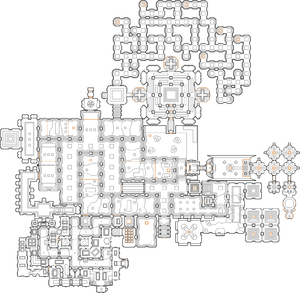 Map of For We Are Many
Letters in italics refer to marked spots on the map. Sector, thing, and linedef numbers in boldface are secrets which count toward the end-of-level tally.

* The vertex count without the effect of node building is 15015.