MAP29: Harborcide is the twenty-ninth map of Project Einherjar, and the first map of Episode 5: Return to Jotunheim. It was designed by Mike MacDee (Impie) and uses the music track "". 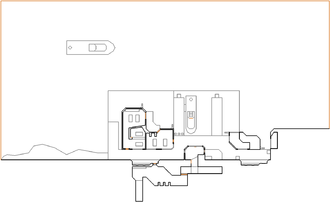 Map of Harborcide
Letters in italics refer to marked spots on the map. Sector, thing, and linedef numbers in boldface are secrets which count toward the end-of-level tally.

A short, bloody map. Grab the Shit Creek scattergun from the scrap pile behind you and blow all the oil drums nearby: when the alerted dog patrol comes gunning for you, they'll run right into the flames. Mop up the pier before entering any of the buildings.

The building to your left houses the switch that opens the gate to the docked ship. The switch is guarded by a Thane. Board the ship and hit the switch to exit the level.

The map is small and has a low enemy count, but it is easy to get overwhelmed in the initial bedlam once the first shots are fired.

Initially the first map of Episode 4, which would take place alternately in Jotunheim and Midgard. Impie eventually broke it off from E4 and used it as the foundation for a fifth episode, developed alongside the fourth.