MAP29: Heated Trauma is the twenty-ninth map of Whispers of Satan. It was designed by Paul Corfiatis, who also wrote the music track for this level, "The Secrets of Hell". 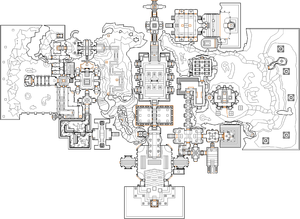 Map of Heated Trauma
Letters in italics refer to marked spots on the map. Sector, thing, and linedef numbers in boldface are secrets which count toward the end-of-level tally.

Press the switch to rise up then open the door. There will be some mancubi in front, some imps in the side cages, and some cacodemons from behind. There is a bridge you need to span going north, but you need to raise it first. To do so, there are two side paths that have Hell knights on them, and both have switches to raise the bridge. Once you raise the bridge, open the door and kill the baron of Hell downstairs, then open the next door. In this room you have a total of six keys on pillars, and six different paths in order to lower these keys. Kill the arachnotrons in the room, and gather the supplies you find in the room. Then take any one of the portals which indicates which key you are trying to get. You can take these paths in any order you wish:

Yellow keycard: Take the portal to appear outside a fortress. Flip the switch to open the bars and head down the path. At the end of the path is a lift, so flip the nearby switch to lower the lift. In the next room, two side rooms will open revealing barons of Hell and switches. Hit both of these switches to continue northward. The next area has a berserk pack in the center, so grab it. There are four sets of bars up the stairs blocking the way to the yellow card switch, and you must go through the four small compartments in this room and hit the four switches in each one, to remove the bars. As you hit each switch, imps will teleport onto the pentagram in the middle. After pressing all of the switches, press the yellow switch to open two paths to the sides. An arch-vile guards a teleporter leading back to the hub.

Red keycard: This portal leads to a small room with two doors. Press the switch in front of you and take the right one, and traverse across the blocks, killing enemies as you reach the cavern ahead. Keep heading southward until you reach a wooden door. Open it, and an arch-vile guards a switch. Kill him, hit the switch, and return to the entrance to find the other door is open. Hit the red switch and take the teleporter (looking out for the revenant who appears behind the switch).

Blue keycard: The portal takes you to a room with five different doors. The one behind the column has a walkway with four sets of bars blocking it, and you need to head through each side path in order to go across the walkway. Take the lower right door from the start and climb the steps up to a switch. Take the lower left door and walk on the outer walkway to find the next switch inside a shack with a baron of Hell and revenants. Take the upper left path to climb some stairs up to the third switch. Finally, take the upper right path. You need to press a series of switches here to reach the next door, and they are all in this hall. Look out for spectres when you are hitting the switches. Open the door into a cavern and head through it to a lift. Take it up to the last switch, then flip the switch to head down and then return to the nexus. Now take the door going westward to the walkway to find all the bars are lowered and you can access the door on the other side. Open the door and press the blue switch; this will also lower the column so you can teleport back to the main hub.

Yellow skull key: There are three doors in this library section. The door straight ahead has two arachnotrons guarding two sets of bars. To open these two sets, you need to head through both of the other doors in the first room. Take the southern one and follow the path until you reach the bars. Two compartments open up with Hell knights in them. Hit both of the eye switches to lower the bars and then open the next door. Climb the crates to the left and press the switch to raise a staircase behind you leading to another switch. After pressing it, head back to the main library section and take the northern path. Head down the next hallway, and follow the path to the next door. Do not jump towards the void here or you will die instantly. Open the door, and be wary of imps as you proceed to the next switch. As you return, look out for cacodemons who come out of windows. Return to the main library section and you should be able to get past the bars behind the central door. Open the door behind the lowered bars and kill the arch-vile before the teleporter.

Red skull key: Turn left and press the gargoyle switch. From here, follow a path of pressing unlit gargoyle switches until you reach a skull switch. Press that switch and go all the way down the hall back to the entrance, and the passage to the north will be open with arrows pointing to it. Go there and press the next skull switch to open it as well as the door eastward. Press the red skull switch to open the doors leading outside, and take the teleporter in the shack to return to the hub.

Blue skull key: Ascend the rocks until you reach the building at the very top, looking out for imps and other monsters as you are ascending. At the top, enter the building and press the blue skull switch to reveal a pain elemental in a window and a teleporter back to the main hub.

Once you have lowered all six keys, grab them and head north to the six-key switch. Press it to open the big door and kill the two arch-viles in front. You will see a BFG9000 ahead, and next to it are two cyberdemons behind fences. Kill both of them to access two more switches that you need to flip. After flipping them, walk to the lift and it will lower you to the exit. 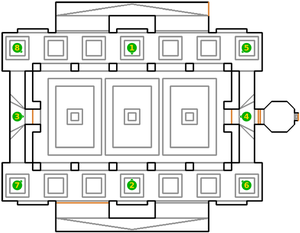 * The vertex count without the effect of node building is 13963.