MAP29: Hell on Earth is the twenty-ninth map of Scythe. It was designed by Erik Alm, and uses the music track "Lady of the Snow" by Symphony X. 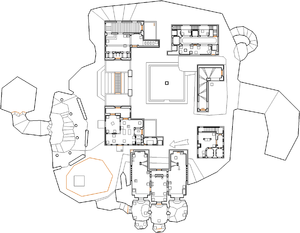 Map of Hell on Earth
Letters in italics refer to marked spots on the map. Sector numbers in boldface are secrets which count toward the end-of-level tally.

Open the door at the start and get the shotgun. There are a number of monsters here, so kill them and when you are done, head to the blue room on the right and flip the switch to open the door to the northwest (behind it is an arch-vile). Do not forget about the supplies in the room behind you if you need them. Then exit the building to find yourself in a snow-covered city. There are quite a lot of monsters around here, so kill them and explore the city gathering items and weapons. When you are ready to proceed, find the arrow on the ground floor and go to where it is pointing. You will find a yellow switch if you look in that direction, but the red brick building nearby has a switch and a lift that lowers when it is pressed. Flip this switch and go up, looking out for shotgun guys and mancubi as you head through the building. Through the next door, hit the switch here to open up the door opposite of it. In the next room, you can get a plasma gun on the outside terrace, but go into the next door to the next hall. There is a blue door here, and the next door you come across will net you in a cargo room with the blue keycard on another terrace. Now take the blue door you passed, kill the mancubi up here, and cross the bridge. In case you fall off, there is an extra blue door on ground level on the next building that is on the other side of the bridge. Either way you go, head up the staircase you see, going through the next door and flipping the switch on the terrace there. This opens up a room on the opposite building you see, with barons of Hell and the red keycard. Just drop down the building and head into the side entrance of the building. Keep going up the stairs until you reach the top floor where you will see the red key, but it is blocked by some bars. Get into the southern crate-filled room and find a switch guarded by a revenant. This opens the bars, so you can access the key.

You then need to head into the green building just south of the one you were in. To do so, you need to climb to it. There might be a few cyberdemons on a raised snowy platform with an obelisk on it. Make sure to kill them and grab the nearby items if you have not already, then head right, staying at this level as you head around the green building. You will go around a yellow door, and find the yellow keycard right on a snow square nearby, but you cannot reach it yet. The other end of the building has a red door leading inside, so take this door and flip the switch. This lowers the switch, as well as the yellow key, but also releases a cyberdemon nearby. Grab the key and return to the yellow switch near the arrow. Press it and head inside the large brown building to find a few rooms with crates. Take the right path as the other one is blocked off and flip the switch at the end. This raises the floor up, so head through the other path which is open to hit the switch there. This opens some bars in the center south of the building, so head through them to go outside again. Be careful, as either a cyberdemon on Ultra-Violence or higher, or an arch-vile will appear directly in front of the switch. Dispose of the monster and flip the switch. Turn around and go left, through the now-open bars. There will probably be a flock of cacodemons here, unless you got the plasma gun from the red building earlier. Drop back down outside and head for the western part of the map. You will find that you can climb the snowy embankment up to where a cyberdemon is (an arachnotron on Hey, Not Too Rough or lower), and the exit is just to the left.

* The vertex count without the effect of node building is 2522.