MAP29: Island of Death is the twenty-ninth level of Memento Mori. It was designed by Thomas Möller and uses the music track "Hidden Anger" by Mark Klem. 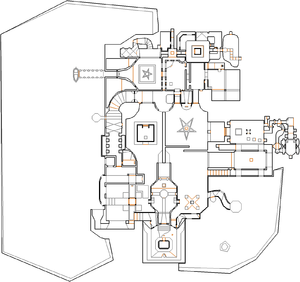 Map of Island of Death
Letters in italics refer to marked spots on the map. Sector, thing, and linedef numbers in boldface are secrets which count toward the end-of-level tally.

Leave the room you are in, pick up the super shotgun nearby and go clockwise around the building you started in, all while dodging shots from imps and revenants. Grab the red key from its alcove. Cross over to the western side of the structure the red key was in, and flip the switch on it. This opens the big door in the north of the starting area.

Proceed through the door. Kill off the imps, demons and chaingunner in this room. Head down the stairs in the east of this room to a courtyard with a structure containing four berserk packs. Run to the north, and look carefully for the break in the northern wall (it looks like one wall, but is actually two walls with a gap between them).

Squeeze through the gap, and enter a new courtyard with a pentagram on the floor. Head straight for the red door in the north. Kill the chaingunners and lower the metal wall ahead. In this new room, snipe the imps on the platform in the north, then find the switch in the northeast corner and flip it (beware of chaingunners peeking out from a gap in the east wall).

This will lower the barrier in the west wall of this room. From this moment, do not fire a shot to avoid activating a teleport trap. Run around the square metal structure ahead of you as it lowers, then run full tilt towards the pier in the west marked "exit". If you can straferun, even better. By doing this, you will not only have prevented a large horde of monsters from teleporting in, you will have beaten a set of gates that lowers in front of the pier, trapping you in the area for 30 seconds.

Get onto the boat at the end of the pier to exit this level.

In single-player gameplay, under UV speed, NM speed, and UV pacifist rules, the map is extremely easy to finish. Going clockwise around the building you start in not only lets you access the red skull key (which can be grabbed without lowering the platform it is on,) but also opens a shortcut into the area with the berserk packs, which allows you to reach the red key door, and consequently, the exit, very early on. This makes the map completable in less than 30 seconds.

On the other hand, in cooperative multiplayer, the walkover linedef opening the shortcut, as well as the quickest way to the red skull key, are blocked off by green torches. This is intended to force you and your team to travel through much more of the level in order to complete it. However, two tricks devised by Kristian Ronge, the current UV pacifist record-holder on this level, allow the map to be completed through the single-player path even with the torch barrier. The first is performed in the starting area, by moving carefully around the pile of skulls, making sure not to fall into the blood moat, allowing you to obtain the red skull key in that location. The second takes advantage of the ability to trigger linedefs from any height, by opening the blood fountain in the first room, standing at its southwest or southeast sides within activation range of the southern switch, and flipping it to open the shortcuts. From there, the route is the same as in single-player. The tricks are demonstrated in Ronge's 00:49 coop speedrun ([1]), which requires ZDoom 1.22 and a command line argument to initiate a faked cooperative multiplayer game.

* The vertex count without the effect of node building is 2124.