MAP29: Kings of Metal is the twenty-ninth level of Memento Mori II. It was designed by Jens Nielsen and uses the music track "Junkie Smack" by Mark Klem.

"Kings of Metal" is also the name of an album and song by the heavy metal band Manowar.

Hmm. We seem to be quite near something REAL big, so watch out. 28 sectors are ours, let's bring this to an end. Obviously one of your last missions on IO - enjoy the violence! 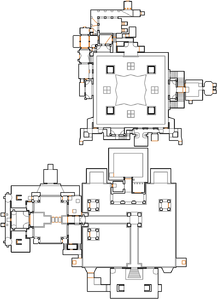 Map of Kings of Metal
Letters in italics refer to marked spots on the map. Sector, thing, and linedef numbers in boldface are secrets which count toward the end-of-level tally.

Take the shotgun at the start and turn right. Fall into the pit. Take either stairway at the east. When you reach the top, behind the door there is a small compartment to the west with a super shotgun, two rockets and two sets of shells. To the east there is a lift. Pick up the super shotgun if you don't have one, take the lift up, head east and kill two spectres. (secret #1) Enter either teleporter. You arrive in the middle of a long corridor, which is the most westward part of the map. Go south, find a U-shaped compartment with a skull switch inside and flip it. It will open a portion of wall at your 4 o'clock, as well as two wall segments in the long corridor, revealing two teleporters, which you may use anytime to return to the area where the spectres were in case you need supplies. Go to the northern end of the corridor, kill the enemies and press another skull switch in an identical U-shaped compartment. Collect the red keycard from the room located nearby to the northeast. If you are playing on Hurt Me Plenty or higher difficulty level, it is strongly recommended to follow the corridor to its eastern end and kill the arch-vile through the window before progressing further.

Now look for a lion switch and a square on the floor which is textured differently from the rest. It is a lift platform and the purpose of the switch is to lower it. Stand on the square, press the switch, collect the rocket launcher, jump off the platform and cross the room diagonally in the southeast direction. Press the satyr switch lowering the southeastern lift, ride it up and ascend a set of stairs. (secret #3) If your health is low, press the lion switch to the south, ride down the lift, grab the berserk pack and quickly return to the lift before it raises. Ascend another set of stairs. (The lion switch in this room's southwest lowers the stone platforms where the blue armor and the soul sphere rest on.) Go north, jump down and look for a gargoyle switch on your left. Each time you flip the switch, the pillars will raise from the nukage pool by 24 units. On Hey, Not Too Rough or lower it is sufficient to press the switch five times to be able to cross the gap; kill the mancubus and pick up the blue keycard. On Hurt Me Plenty or higher a different strategy is recommended: flip the switch seven times to make the pillars higher than the ledge you are standing on. These will form a barrier against the cyberdemon's rockets. Walk west to the edge of the ledge, after which the door behind the pillars will open. The cyberdemon guarding the blue keycard can be disposed of from the ledge using any weapon, while his rockets will not hit you as long as you stay on the ledge. When he is dead, fall into the nukage pool, press on the northern or southern side of the pillars to lower these all like a lift, stand on the westernmost pillar and when it is raised again, jump off the pillar to the west and collect the blue keycard.

To get the yellow keycard you must find the way back to the pair of teleporters first. Press the lion switch lowering the northeastern platform. Ride the lift up and do the same with another lion switch. (secrets #2 and #4) Go north through a newly opened passage, head west, then south and enter either teleporter.

From the room into which you have been teleported head west and go to northwestern part of the big room with the irregularly shaped toxic pool. There are three steps here and the red key door. Open the door, shoot the lion switch in front of you (the silver bars should open), press 'use' on the blue bars to open these as well and fall down into a L-shaped corridor with brick walls and torches. Follow the corridor to the end, open another set of blue bars, take the yellow keycard and press the lion switch.

Return to the pair of teleporters. Enter either teleporter, then go to north, to the lift activated with the lion switch, onto the bridge and then east. When you get past two guard towers with chaingunners, jump off the ledge to your left (north), open the blue bars at your right and press the satyr switch behind the bars, which lowers another lift. After taking the lift up turn left (north), open the yellow key door, use the lift situated on your left (lion switch) to go up the ledge surrounding the room and press the skull switch which ends the level.

Head to the red door at the northwest of the map. Flip the nearby switch on the western wall and head to the easternmost room. Press the gargoyle switch and a section of the walkway to the east will lower. Ride it up like an elevator, jump across the gap and enter the newly revealed teleporter. Look to the west to find that a portion of the grey stone wall does not have a stone texture. Press it and an elevator will lower to the north. Take it up, drop into the wooden hallway and press the skull switch at its end. Fall down into the newly created pit with a stairway and go down (north) to arrive in the room with the BFG9000 and the megasphere. Both lion switches in front of these lower the corresponding lifts allowing to pick the items up.

Follow the steps from secret #4 description until you fall into the wooden hallway. Do not enter the northern compartment, press the skull switch at the west instead. Fall down into the newly created pit with a stairway and go down (north) to arrive in the room with the BFG9000 and the megasphere. Grab both of these. Return to the easternmost room, take the lift up, enter the teleporter again, take the lift up to the wooden hallway again. Enter the secret compartment.

On Ultra-Violence or higher there is an arch-vile in the final room. Instead of taking the lift up to the ledge there is a possibility to make a relatively easy arch-vile jump to save a few seconds.

The soul sphere and combat armor standing on the stone pillars can be grabbed without lowering the pillars, by straferunning against them.

* The vertex count without the effect of node building is 1845.