MAP29: Marble Tombstone is the twenty-ninth map of 1000 Lines 2 - Community Project. It was designed by Ben Mansell (Bauul) and uses the music track "The Occultist", originally created by Tristan Clark for The Realm of Parthoris. 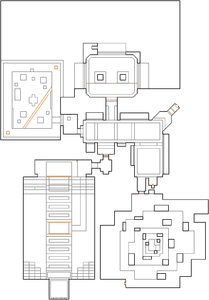 Map of Marble Tombstone
Letters in italics refer to marked spots on the map. Sector, thing, and linedef numbers in boldface are secrets which count toward the end-of-level tally.

Walk forward to collect a shotgun, chaingun and super shotgun in front of you - three closets around you will open to reveal a pack of shotgun guys and two packs of imps. Enter the north alcove to find a berserk pack, an armor and a backpack, then look west to shoot a button in a recess that will open the south door and allow you to leave the room. You will enter a large hall with imps and one or two arachnotrons to the east, as well as a rocket launcher and plasma gun by the exit doors if you need them. Leave the room by the west doorway and collect a megasphere, then walk west to enter a rectangular arena with marble blocks.

As you walk towards the north side of the arena, the bridge you crossed to enter the arena will drop away and you will be assaulted by imps, revenants, demons, Hell knights (plus an arch-vile on Ultra-Violence (UV) and Nightmare (NM) skill levels) that teleport in - kill them while you wait for a column on the north side to lower and reveal the red skull key. Collecting the red key will raise the bridge leading into the arena so you can escape.

Return to the hall and go to the south end to find a red skull bar that you can open to reach a teleporter; arm yourself with the plasma gun or chaingun, take the megaarmor and supercharge in front of you then go round the corner to collect the yellow skull key. The walls around you will lower to reveal imps and demons initially, followed by chaingunners, revenants, mancubi and knights - on UV and NM, you will also have to contend with two arch-viles waiting on the final set of walls. Once all the walls have lowered, go to the south edge of the room and look west to see a gargoyle switch behind a pair of candles - this switch will open a door on the north side, letting you return to the hall.

Go to the west side of the hall and look south to see a door with red and yellow switches on either side; press both switches to open the door and go through it to find a megaarmor and berserk pack, then lower the nearby lift and ride it up to a walkway with some large ammo boxes. Follow the walkway south until you drop down to two large staircases, then head up either staircase to trigger an ambush by mancubi to the north and knights to the south. Clear a path through both sets of monsters and take the blue skull key sitting at the top of the staircase.

With the blue key, go up to the top of the north staircase to collect a megasphere, then open the blue skull bar in the north-east corner to get back to the lift. Ride the lift back down to get back to the hall, then go to the door in the north-east corner and try to open it; behind this door is a cyberdemon, and opening the door will also release a large group of other monsters behind you (including one or two more cyberdemons on Hurt Me Plenty skill level or higher). Kill the cyberdemon behind the blue key door, then press the demon switch behind it to end the level.

* The vertex count without the effect of node building is 814.