MAP29: Migdal Bavel is the second map of Pesha. It was designed by Darryl Steffen (dobu gabu maru), and uses the MIDI composition "Echoes in the Darkness" by Aaron Walz. The map begins in a spacious, atmospheric outdoors area and takes the player through a mine shaft before taking on a more typical, "tech" theme at the end.

The title is Hebrew, and means "Tower of Babel". 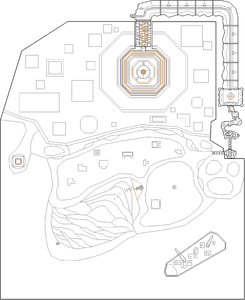 Map of Migdal Bavel
Letters in italics refer to marked spots on the map. Sector, thing, and linedef numbers in boldface are secrets which count toward the end-of-level tally.

Head up the stairs and enter the cave opening to the east. Inside the cave, go up the stairs and press a switch up on the ledge to open the door. Head to the north-western part of the cave system, then go down the dark passage until you come to a door. Beyond is a room with revenants and mancubi guarding four switches, two on each side of the room. Press at least two switches in two opposing corners (NE and SW, or NW and SE); this will allow you to climb up to the platform with the plasma gun in the middle of the room. When you do so, bars blocking your way will lower. Head down the mine shaft, and use one of the lifts to get up on the ledge, where you will find a switch that will open the large door. Head on forward until you come to the last, large hall filled with revenants and a cyberdemon or three. Go up the stairs and drop down the hole; exit the level by approaching its center.

A multiplayer-only shotgun (Thing 728) and ditto chaingun (729) have no flags set for any of the three difficulty classes, so they do not actually appear in the level.

The first switch can be pressed from the ground level, without climbing onto the ledge.

The bars blocking your way forward in the mancubus/revenant room are spaced widely enough for the player to simply walk between them, allowing you to skip fighting the monsters or pressing the switches.

* The vertex count without the effect of node building is 3932.

The map was made in ten hours.