MAP29: Odyssey of Noises is the twenty-ninth map of The Plutonia Experiment. It was designed by Milo Casali and uses the music track "At Doom's Gate", as in Doom's E1M1: Hangar.

Odyssey of Noises is one of the most expansive and difficult of the official Doom levels. It resembles a city, complete with roads running between the numerous buildings. At one end of the level is a vast lava-filled crater. Because of the level's layout, it is very unsafe to be out in the open, since the player is exposed to attack by monsters sniping from numerous windows almost everywhere in the map. 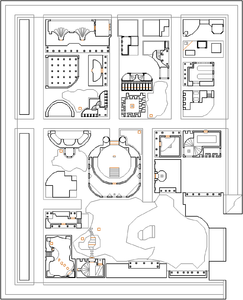 Map of Odyssey of Noises
Letters in italics refer to marked spots on the map. Sector, thing, and linedef numbers in boldface are secrets which count toward the end-of-level tally.

Take the shotgun in front of you (and a backpack sitting on the starting teleporter) then drop down to a pool of blood and open the north door to get outside. Turn left (west) and follow the road, sniping any enemies in the windows of the buildings on either side, until you see a U-shaped building on your left that contains a plasma gun and megaarmor along with two Hell knights. After this building is a crossroads - take the south road and head forward until you pass a ledge with one or two arachnotrons on it, then walk between some wooden pillars on your left and follow the tunnel here to some steps that lead up to another arachnotron.

You need to head south up some stepped platforms to a door while dodging the revenants and chaingunners on either side - there is also a platform in the magma crater to the east which holds (depending on skill level) a revenant, arachnotron or cyberdemon which will pick you off if you wait too long. Run up to the top of the steps and the door will lower to reveal two chaingunners; kill them then go through the door and turn left to see another door which has the red skull key behind it. Entering the chamber with the red key (taking it is not required) will open an alcove on the west side of the previous room releasing an arch-vile; kill it and press the switch in its alcove to lower two sets of red bars elsewhere in the level.

Return to the starting building on the east side of the map and dispose of the demons (and revenants on Hurt Me Plenty (HMP) or higher) coming from that direction. On the other side of the road is a brick structure with a super shotgun on it - go round to the north side of the structure to find some steps that you can climb to get on top of it. Take the super shotgun then run north through a short tunnel to jump across to the next building, which contains a couple of chaingunners, then continue north through a cross-shaped window to reach a building with a metal rooftop.

The yellow skull key is on a step in the north-west corner of the roof, but approaching it will open two traps - one in the building to the west with one or two chaingunners, and another in the brick structure behind you containing two cacodemons (plus a pain elemental on Ultra-Violence or Nightmare). Kill these enemies then collect the yellow key.

Drop down to ground level then head to the north-western block of buildings. The building on the east side of this block has a yellow key door in its east wall - open this door and kill two revenants waiting behind it, then press the skull switch to open a set of bars blocking your way to the blue skull key. Leave the building and follow the road south to a crossroads, turn left then take the first right to get on the road leading to the magma crater. Continue along this road until you see a door on your left with chaingunners on either side, then open this door to find the blue key.

Leave the building and follow the road north to a junction, turn right then left to get on another road then follow it north until you see a wide doorway on your left with wooden pillars. Go up the steps here to a roof and run north to leap to the next building with imps, then run west to leap across another roof and get to a blue key door guarded by one or two revenants. Open the door to enter a room with fan-like lights on the floor and press both of the blue skull switches here, watching out for a baron of Hell guarding a supercharge in the south-west corner.

Leave the building and return to ground level, ready to kill some cacodemons (and two pain elementals on HMP or higher) that have been released from a building to the south-west. Go to the building in the south-west corner of the map and head up the steps on its west side to enter a red rock cavern with a blood floor, as well as three arch-viles in the north-east, north-west and south-west corners. You need to step across some red stones to reach the exit portal in the south-east corner, but the stones will drop away as you step on them - if you miss your footing and fall into the blood, go to the teleporter in the north-west corner to return to the entrance door then step into the alcove that opens on your left to teleport to the portal.

The building just west of the starting area contains seven chaingunners, who are guarding a medikit and 21 rockets.

The southern-most building in the north block contains a rocket launcher as well as several fiery alcoves with rockets. When you take the rocket launcher ten demons will teleport around you - switch to a different weapon to kill them quickly.

The south-east building in the north-western block houses up to ten chaingunners in windows. By going up the steps in this building you can kill the chaingunners from behind as well as finding four boxes of rockets, four medikits and two boxes of shotgun shells.

You can enter the castle-like building in the west block through a wide door on its north side, but use caution as there are six chaingunners on the semicircular ledge ahead and two more in niches on either side. Press the button in the middle of the room to raise some stairs ahead then go up and open the door at the top to find a box of shells and a supercharge which are guarded by two barons; make sure to collect the six boxes of rockets in the corners before leaving. Going up the steps will open a monster closet to the west containing demons and revenants, as well as two boxes of shells and three stimpacks.