MAP29: Outpost Omega is the first secret level of Doom 64 in numerical order, and the second chronologically (the first, technically, being MAP32: Hectic). Should this level be undertaken right after MAP04: Holding Area, this is where the player will first come across mancubi and pain elementals. The level also contains the first of the strange artifacts known as Demon Keys which upgrade the Unmaker, which can also first be found in this level. It is designed by Danny Lewis and uses the music track "Hellistatic", first heard in MAP05: Tech Center. 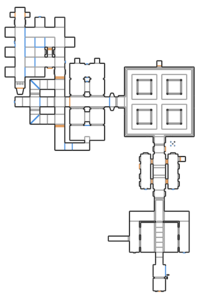 Map of Outpost Omega
Letters in italics refer to marked spots on the map. Sector and Thing numbers in boldface are secrets which count toward the end-of-level tally.

In-game text preceding this level states that Outpost Omega is deemed a classified level of the base by the UAC. This is likely because it houses the red Demon Key which was presumably under study here, with its purpose remaining a mystery, or because it was deemed too dangerous for it to fall into the wrong hands. The relic itself is in heavy confinement and requires many steps to access (see Secrets, Non-official below).

Clean the control rooms to both sides of the corridor of former human soldiers and lost souls. Press the switch in the right-hand room to open the door to a room with four cages. When you get the rocket launcher in the middle of the room, a mancubus appears in each of them, you have to kill all to advance. Do not miss the red key if you want to both obtain the first Demon Key for the Unmaker and be able to activate the red portal switch in The Absolution (see Secrets, Non-official below).

Pass the next room with several monsters (including pain elementals, cacodemons, and nightmare imps). To the left you can see where the blue key is stored. Go into the corridor, press the switch to open the doors, and walk up the staircase. Get the blue key behind the normal door and enter the storage area behind the blue door. Watch out for imps and Hell knights, get the yellow key – and if you can find them, the Unmaker and the first Demon Key.

Back to the room with the four cages, get a berserk pack and kill another set of mancubi. Return to the left control room, press the yellow switch to open the exit area with more monsters waiting. Press the left switch and a passage to the exit will be revealed, along with more lost souls being spawned.

This is one of the rare levels in Doom 64 where score-affecting secrets include both objects and areas, and where the actual number of secret objects can change dynamically during play.

After getting the red key, the Demon Key can be obtained in the tall multi-chambered room which also houses the yellow key. You traverse the room by leaping from available platforms or dropping down levels to reach the bottom. There are teleporters at the bottom which will send you back up to start over, so you can explore as much as you need.

After obtaining the yellow key, teleport back to the start of the room and drop to the left again. There is a switch in a room to your right, guarded by an imp or Hell knight. Get a bullet weapon ready and run there, passing two chasms, running to clear the gap. Hit the switch and a platform will temporarily lower back the way you came. Run back to the lowered platform quickly and ride it up. This will reveal a switch on the opposite wall, next to the teleport target, which can be shot to be activated.

That switch will permanently lower a platform you ran over twice. Repeat the step, and the Demon Key is accessible.

Upon making your way to the final portion of the map, passing through the room with the four cages, it is not necessary to pick up the berserk powerup as this will trigger another round of imps or mancubi in the cages, and a pack of lost souls in the starting corridor.