MAP29: River Styx is the twenty-ninth map of TNT: Evilution. It was designed by Jimmy Sieben and uses a music track shared with MAP04: Wormhole and MAP13: Nukage Processing. 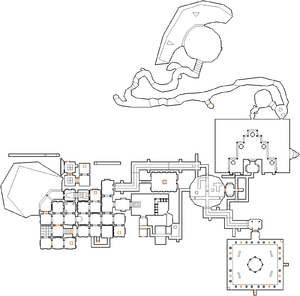 You begin in a vaguely circular outdoor area. Kill the enemies, and descend a flight of stairs into a long, winding red tunnel ahead. This tunnel is sparsely populated by imps, demons, lost souls and some shotgun guys, which should not put up too much resistance. Follow the tunnel to its end, being careful of a demon ambush from behind about one-third of the way through.

You will then emerge into a blood-filled courtyard with a green marble "temple" ahead of you. Step into the temple via the stairs at its sides and enter the narrow path ahead. Turn right and take the second left path. You should go down a short flight of stairs. Turn right to emerge into a lava-floored circular room with small brick ledges.

Face forward (west) and enter a thin, narrow lava path. Follow the path to the end, being wary of enemies on raised platforms next to the path. Near the end of the path, you will step up from lava onto a brown-floored corridor. Continue forward, and the left wall will open, releasing some monsters and revealing a switch. As you step into the area with the switch, another trap will open behind you. Handle all the monsters as best as you can.

Flip the switch and begin backtracking to the circular room. Note that all the raised platforms next to the path have lowered, allowing you access to a significant amount of rockets, shells and medikits on one of them. Further up, a door has opened, allowing access to a soulsphere (and a plasma rifle on Hey, not too rough and lower). Do be careful; the soulsphere is guarded by up to nine chaingunners.

Face north, walk around the raised brick ledge in front and enter a marble hallway, which turns left into a lava-floored hallway with a thin brick ledge in the middle. Kill the shotgun guys on the walkways and revenants in the wall alcoves (on Hurt me plenty and higher), and follow the walkway to its end.

You will now enter into a maze of similar-looking, marble-walled rooms. Turn left and go straight through the next room into a marble floored square room. There will be two pathways on either side; go through the right pathway, turn left, then right again. You should now face a flight of stairs. Ascend these stairs, and a large number of crushers in the room in front of you will activate. From the crusher room's entrance, you should just be able to see the exit on the left (southern) wall of the room. As the three or four crushers blocking your way to the exit rise together, quickly run through to the next room. Take care of the cacodemon ahead (on Hurt me plenty and higher) and take the teleporter in the room behind it.

You should be teleported to a room near the north side of the maze. The blue skull key should be on a staircase in front of you. Take it, being wary of any monsters visible through the window ahead.

Go back through the teleporter you entered from, go straight to the end of the hallway and turn right. You should be facing the crusher room again, and the exit from it should be on your right. Once again, wait for the crushers blocking your way to rise together, and run through to the next room. Face north and proceed to the room right at the end, where the blue skull switch should be on the east wall. Flip the switch.

Backtrack to the room just east of the crusher room, and go east until you can go no further. You should notice that a new alcove has opened up in the south wall of this room, with a skull switch at the end, flip the switch. This opens a window on the room's east wall and a U-shaped passageway on the room's south wall to an otherwise inaccessible room with the red skull key.

On Hurt me plenty and below, it is a simple matter of going through the passageway and retrieving the unprotected red skull key. However, on Ultra-Violence and higher, the red skull key room contains a spiderdemon, and upon backing out of the skull key alcove, you will be exposed to it via the newly opened window. A suggested strategy is to bring any remaining enemies in the maze to it, bait them into monster infighting, and use the U-shaped passageway to attack the distracted spiderdemon with a rocket launcher, especially with the large amount of rockets supplied in the hallway. Once the spiderdemon is eliminated, pick up the red skull key.

Backtrack to the circular room. Step onto the cross-shaped ledge via steps on each end, and proceed south. Follow the brick walkway to its end. You should end up at an area with four pillars and a red door. Open the red door to enter a large courtyard with a tower in the middle. Dispose of the enemies (prioritize the ones on the tower first, especially the arch-vile and baron of Hell on Ultra-Violence and above). If necessary, use either one of two teleporters in the northeast and southwest corners; they are linked to each other, and will allow you to switch positions and get the jump on enemies.

You will be teleported to the final stretch of the level. Kill the Pain Elemental in front of you (on Ultra-violence and above). The next room on the right has a raised demon-head platform on the floor, which is linked to a teleport ambush, set off by sound. The monsters that will teleport in, by each difficulty level, are as follows:

Go through the exit door and dispose of the shotgun guy(s). Flip the switch on the wall ahead, which will lower the exit teleporter on the east wall of the room. Step into it to end the level.