MAP29: Saint Peter's Gate is the twenty-ninth map of Deus Vult II. It was designed by Huy Pham (Doom Marine) and uses the music track "Stickerbrush Symphony" from Donkey Kong Country 2. The par time defined in MAPINFO is 5:00. 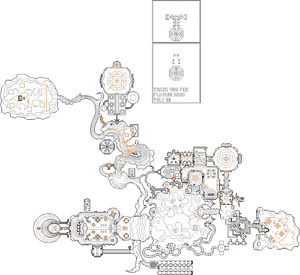 Map of Saint Peter's Gate
Letters in italics refer to marked spots on the map. Sector numbers in boldface are secrets which count toward the end-of-level tally.

Secret Exit: From the fork leading to either the normal exit or the original Deus Vult, go straight towards the sun to exit the level and head into MAP31.

Suicide Exit: At the part of the level resembling the red crescent-shaped area from Cathedral, you can perform a death slide so you can slide under the outer bend of the crescent and end the map.

No fewer than 105 imps (Things 5766 through 5870) have no flags set for any of the three difficulty classes, so they do not actually appear in the level.

* The vertex count without the effect of node building is 22734.