MAP29: Seven Dead Disciples is the twenty-ninth map of Doom 2 Unleashed. It was designed by Keeper of Jericho and uses the music track "Death's Bells" by L.A. Sieben.

When using the music WAD included with this megawad, this level instead uses the music track "McBattle" by Clare Parker. 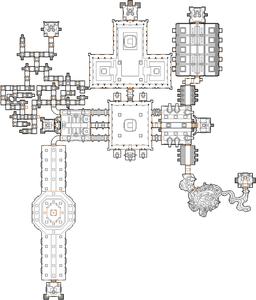 Map of Seven Dead Disciples
Letters in italics refer to marked spots on the map. Sector, thing, and linedef numbers in boldface are secrets which count toward the end-of-level tally.

Take the chainsaw and armor in the starting room then go through the wooden door to enter a central area with a blood fountain - from here you can access every other part of the level. Collect the shotgun then kill the imps on the fountain, as well as the shotgun guys (or chaingunners on Ultra-Violence (UV) and Nightmare (NM) skill levels) in the cages around it. There are six doors on the east and west sides that lead to six switches which will open the way to the exit - three of the doors are unlocked and lead to keys, which you can use to open the other three doors. After pressing the switch at the end of each section, watch out for a cyberdemon that appears in the central area.

Go through the middle door on the west wall and kill one or two Hell knights waiting behind it, then open the next door to find a chapel with various monsters including imps, chaingunners, knights and revenants (ignore the mancubi overhead as they cannot see you). Kill everything then go past the altar to find a wooden door, go through it and open the bloody door in the west wall to find a small room with a throne - as you enter a pair of bars will close behind you and an arch-vile will appear on the throne. Go round the back of the throne to find a red skull key and a skull switch to re-open the bars - press it, kill the arch-vile then return to the central area.

Open the south door on the east side and kill the cacodemon waiting behind it, then open the next door to enter a hallway with one or two arachnotrons as well as several caged monsters overhead - depending on skill level these will be chaingunners or other enemies. Follow the blue floor to the end of the hallway and open the door at the end, kill the revenants behind it then pass through the next door and press the blue switch on your left to lower a lift. Follow the lift down and open the door in front of you, kill the imps ahead then go forward to a cavern with a lava pool - as you approach the pool a number of lost souls and a pain elemental will appear in it. Head east into a passage until you reach a passage with one or two revenants guarding a door, then go through it to find another throne where an arch-vile will appear. Kill this monster, then go behind the throne to find a yellow skull key and a skull switch - press it to open the bars blocking your way out, then backtrack to the central area. (Watch out for the spectres that teleport into the lava cavern on the way.)

Open the north door on the east side and kill the mancubus behind it, then open the next door to enter another hallway with one or two arachnotrons as well as several caged monsters overhead. As before, follow the blue floor to the end of the hallway and open the door at the end, kill the revenants behind it then pass through the next door and press the blue switch ahead of you to lower a lift. Go round the corner and open the door in front of you to enter a wide hall guarded by a spiderdemon - when you enter the room, more monsters will appear on the marble blocks on either side (imps, knights and/or mancubi depending on skill level). Kill the spiderdemon then cross the hall (taking a megasphere on the way) and open the door at the far end to find the third throne. Kill the arch-vile that appears on it then look behind the throne to find the blue skull key and a third skull switch - press it then return to the central area, watching out for the knights (or barons of Hell on UV and NM) that have appeared in the spiderdemon's hall.

Back in the central area, open the middle door on the east side (between the red skull markers) and kill one or two barons behind it, then press the blue switch on the left to lower a lift. Ride the lift up and open the door in front of you to enter a walkway with three cacodemons, kill them then follow the walkway to another door leading to another throne room. Kill the arch-vile that appears then look behind the throne to find the fourth skull switch along with an energy cell pack. Press the switch, then backtrack to the central area.

Open the north door on the west side and kill the revenants on the staircase ahead, then climb the stairs and open the door at the top to reach a walkway with one to three mancubi (these were visible from the chapel below but could not be attacked). Follow the walkway to another door, then go round the corner to yet another door which leads to a maze of passages that contain various monsters. From the entrance door go right, first left, right, left, left, right, left, right, left (over nukage), right (over nukage), right then left to find a knight (or baron on HMP or higher) guarding a door. Open the door to find the throne, kill the arch-vile that appears on it then look behind the throne to find the fifth skull switch and a box of shotgun shells.

Return to the central area then open the south door on the west side and kill the imps on the staircase ahead, then climb the stairs and open the door at the top to reach a walkway with one to three mancubi. Follow the walkway to another door, then go round the corner to yet another door which leads to a columned hall with arachnotrons on either side. Head towards the flesh and blood fountain with four caged imps above it (or revenants on Hurt Me Plenty (HMP) skill level or higher) and be ready to kill six knights that appear on either side (or barons on HMP or higher). Open the door at the south end of the hall to find another throne - as always, kill the arch-vile that appears on it then press the switch behind the throne so you can leave the room. Back in the columned hall you will have to contend with mancubi as well as a crowd of revenants, zombies and imps.

After pressing all six switches behind the thrones, return to the central area to find that a large door on the north side has opened. Go through it to find an armor, a supercharge and a BFG9000 - you will need this weapon shortly as a large number of monsters are waiting to ambush you behind the next door. Open the door and kill the caged zombies in the next area, then equip the BFG9000 and step through the door - a large number of imps, revenants, knights, barons and some arachnotrons will appear in front of you, as well as mancubi, cacodemons and pain elementals to the left and right. On HMP or higher, there will also be two caged cyberdemons on raised platforms.

Fight your way to the north end of this arena to find a megasphere, then open the door here and step through to find a final throne. Kill the arch-vile that appears on it then look behind the throne to find a skull switch - press it to open some bars behind you, then step through the fire wall to finish the level.

In the central area, open the four wooden doors on the north and south walls to find a super shotgun, chaingun, rocket launcher and plasma gun as well as ammo for these weapons. In cooperative play, voodoo dolls will collect one or more of these weapons for players 2 to 4.

Just before reaching the yellow key room, the passage will split in two. Take the south fork to find a baron guarding an armor.

Exploring the red maze in the north-west of the level can lead you to several items including a berserk pack, a megaarmor and a supercharge.

* The vertex count without the effect of node building is 12811.

The level's name probably refers to the seven arch-viles that appear on the thrones throughout the level.