MAP29: Snakeskin Treachery is the twenty-ninth map of Unholy Realms. It was designed by Josh Sealy (Joshy) and uses the music track "Guardians of Acheron," composed by John Weekley (PRIMEVAL). 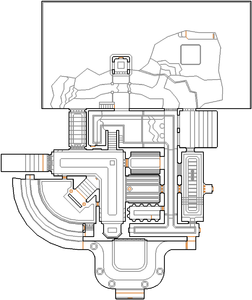 Map of Snakeskin Treachery
Letters in italics refer to marked spots on the map. Sector numbers in boldface are secrets which count toward the end-of-level tally.

A mancubus (thing 676), or two (thing 675) on Ultra-Violence or higher, does not teleport into the map. That is because the switch that opens the teleport closet to allow monsters to teleport only lowers it to 8 above the highest floor, but this particular teleport closet has a ceiling as well, meaning the teleport linedef is only 56 units tall when the switch is used. The mancubus is 64 units tall, meaning that he cannot teleport into the map.

* The vertex count without the effect of node building is 1840.