MAP29: Strayed from Sanity is the twenty-ninth map of NDCP. It was designed by Coen Blazer (DoomedAce) and uses the briefing music from Descent II by Dan Wentz. 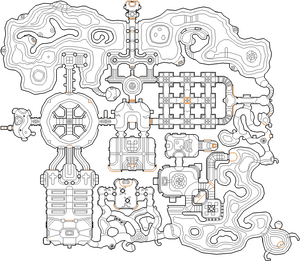 Map of Strayed from Sanity
Letters in italics refer to marked spots on the map. Sector, thing, and linedef numbers in boldface are secrets which count toward the end-of-level tally.

Flip the eye switch to lower yourself into the main hub. From there, make a U-turn and head south, walking into the stone wall to teleport you to a new area. In this place, head south to the blood fountain and down either staircase to find the next eye switch. This opens two passages on the staircases. The western one is a dead-end with a backpack, while the northern one will lead you down to the big hellish cavern below. Go to the southeast corner of the map here to find the blue key. Now you have to backtrack to start of the level. Go back to where you entered the cavern and use the brown lift, then go through the passage back to the blood fountain. Watch out for the pain elementals and cacodemons, and head back into the room you previously teleported into. There will be an opening to the east with a demon and a stone wall which is a teleporter back to the beginning area.

From here, head due west into a circular area. You can explore the area to the west, but to continue, find the switch on the south wall to raise the sets of bars next to it. The switch is an unmarked blue key switch, so if you did not get the key you will not be able to use the switch. With the bars open, head into the church-like area. To get to the altar, use the brown wall to lower it. Go southeast here, into another red cavern. Go north into a marble area with organic columns and the red key. Grab it and be careful of teleporting enemies as you head out. Head eastward dropping back down into the familiar hellish cavern, and return to the hub.

Now take the red door to the east and you will end up in a room with multiple squares. To continue, head into the middle of the area, exposing yourself to several monsters but also opening up the paths to the east. Head down the stairs there into another cavern, where you will eventually find the yellow key. Return to the hub again. Take the yellow door to the north and go down the passage, you will realize that there are three barricades barring access to the exit. One of them can be opened right here with the switch next to it. Once you press this switch, head back to the hub and then go back to the circular hall to the west. Go north and you will find yourself in a hellish cavern area with several mancubi and imps. Find the switch here. This will lower a cyberdemon nearby as well as one of the barriers. Now go back to the hub taking the red door again and going down the steps to the east. You will find that the left path in the fork is now open, so take it into another hellish cavern. This one contains arachnotrons and chaingunners. Find the end of this chamber which holds a switch, lowering a spider mastermind and the final barrier. Now go back, and from the room with the square sectors, stick to the north as you head west and you will be in the room behind the yellow door. From here, head north to exit, but do watch out for the barrage of monsters pouring in just before it.

* The vertex count without the effect of node building is 7670.