MAP29: Temple of Fear, designed by Haggay Niv, is the twenty-ninth map of Hell Revealed. It uses the music track "Chant" from Rise of the Triad.

This is a large temple level. It had about 5 different versions before Haggay was satisfied from the end result. Even the last version took two months to build. The pentagram was designed with precise calculations of sines and cosines to create a perfect pentagram, so please appreciate the effort. 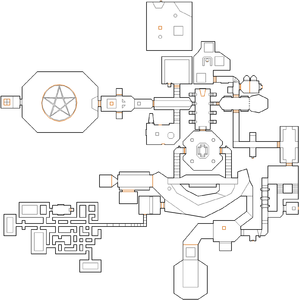 Map of Temple of Fear
Letters in italics refer to marked spots on the map. Sector, thing, and linedef numbers in boldface are secrets which count toward the end-of-level tally.

Demons will attack you from behind, so if you do not currently have a good weapon to kill them, run behind the scrolling pillar to find a chainsaw. The door here cannot be opened, so keep going up the path to a larger room where a super shotgun is. To the west, you will find the blue skull key in a blood moat. Take it, but look out as monsters will teleport behind you. Once you get the key, head up either staircase leading north and open the door to a room with an arch-vile and demons. Open the blue door to the north and kill the mancubus. Grab the box of shotgun shells at the back end of the room and you will trigger several doors to open, some simply just reveal compartments with barons of Hell in them, but two of them lead to the rest of the map. Take the eastern path, to a room with mancubi and arch-viles behind bars. Do not be fooled, the mancubi can actually shoot through these bars. This room has two more doors. You cannot access the one to the right, so take the left one. Take the next door you see (with blue skull marks), and trigger the ambush in this room to find a skull switch. Press it, and you will actually open the door near the beginning that you could not go through before. You also will trigger some imps in the previous hallway, so kill them. Continue downstairs to the next door, and kill the arachnotrons in the next room. Press the gargoyle switch between the torches, then go to that door near the beginning.

Right before you reach the door, you will probably have to deal with a group of Hell knights, so kill them before proceeding. Through the door, look to the right for another gargoyle switch to press, then continue on the path. Make note of the pentagram wall as you climb the steps to the next door. Open it to find a room full of barons of Hell, then open the next door for the next hallway. Where the path splits, you will find the red key to the right, but you cannot get it yet. Opposite the key is a switch, so press that, and return to where you found the pentagram wall. You will find that it is open, so kill the barons of Hell and arch-vile inside and press the skull switch. Return to where you found the red key and you are now able to pick it up. Continue down the hallway to find an imp and a red door, which leads back to the room with the mancubi and arch-viles who were behind the bars.

From there, head straight west, ignoring the two staircases unless you are looking for more monsters to smash or supplies to gather, and open the big door straight ahead. Kill the Hell knights in this room, and grab the boxes of shotgun shells. If you want to avoid fighting arch-viles, then do not step on the teleporter (it does not teleport you anywhere, but the arch-viles teleport onto it). Open the red door to go outside and you should see a pentagram, which should appear after you had pressed both gargoyle switches earlier. Kill the cacodemons, and step on the big pentagram to open the pentagram wall at the back of the area, but look as for two cyberdemons will teleport into the center of the big pentagram. Deal with them, then exit the level.