MAP29: The Black Wind of Mayhem is the twenty-ninth map of 10 Sectors. It was designed by NokturnuS and uses the music track " ". 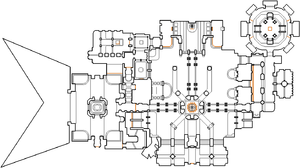 Map of The Black Wind of Mayhem
Letters in italics refer to marked spots on the map. Sector, thing, and linedef numbers in boldface are secrets which count toward the end-of-level tally.

The exit in this map is in the middle, and the way to open the exit involves the switch to the north. However, you need to press two more switches to reach that switch. While doing so, make sure to gather supplies as this will be a very tough level with enemies all around and some teleporting into the main area.

The other switch is on the right side of the map. Take the path on the right and head north into a circular room. Kill the enemies here as you find the lifts that lower. These take you up to the teleporter in the middle, which takes you straight to the switch.

Once you press both switches, jump down into the room with lots of supplies and flip the switch here. Loads of enemies will be revealed upon pressing it. Before you can exit though, go to the southern part of the map and hit the switch there to lower the bars to the exit pillar.

To the southwest of the main area is a candle in front of a rock wall. You can go through this wall to retrieve a soul sphere, a chaingun, some health bonuses, and some ammo.

To get the megasphere, head up the lift as if you were going towards the left switch, but turn right where there is a medikit and boxes of ammo if you have not taken them before. You can see the megasphere to your south, and between the two fences, move through the fence on the right side to jump down to the megasphere.

* The vertex count without the effect of node building is 3259.