MAP29: The Bomb Facility is the twenty-ninth map of Perdition's Gate. It was designed by Tom Mustaine. 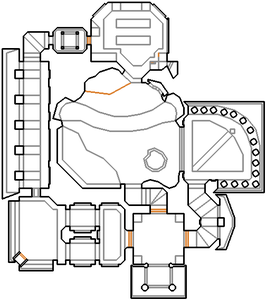 Map of The Bomb Facility
Letters in italics refer to marked spots on the map. Sector, thing, and linedef numbers in boldface are secrets which count toward the end-of-level tally.

At the start, go through the door to your right and collect the blue key at the end. Return to the starting room and open the door between blue torches, then collect the BFG9000 in the following room. Turn around and wait for the red pillar to lower, then grab the red key. Back in the starting room, open the remaining door and follow the path to a computer room. Disable the "Bomb Safety" in front of you, then face right and activate the "Bomb Timer" to finish the level.