MAP29: The Death Domain is the twenty-ninth level of PlayStation Final Doom, and the fifth level of the Plutonia episode. It is based on the PC version of MAP20: The Death Domain from The Plutonia Experiment, with modifications to accommodate the PlayStation's framerate and memory limitations and add enhancements such as colored lighting. It uses the music track "Tendrils Of Hate".

The author of the original level was Dario Casali. Changes for the PlayStation port were authored by Tim Heydelaar.[1] 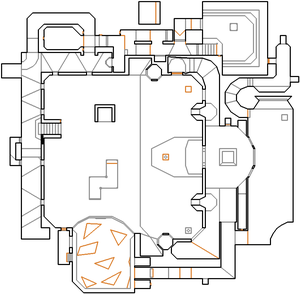 Map of The Death Domain
Letters in italics refer to marked spots on the map. Sector, thing, and linedef numbers in boldface are secrets which count toward the end-of-level tally.

You start in a large outdoor area overlooked by chaingunners on a balcony, and revenants in towers. An arachnotron is also present in a square building in front of you. Run forward to this building and hide behind its west wall to conceal yourself from any enemies shooting at you. Go west and press the switch to lower some stairs into a sludge-filled hallway. Go north, collecting the super shotgun if needed, then head east until you see a lift on your left. Press the switch to lower the lift and ride it up to the top floor. Kill the imps blocking your way and press the switch in the west wall, then step on the lift again and get off at the middle floor where a door has now opened.

You are now in a wooden area. The walls will lower when you go east revealing some Hell knights, plus a revenant on Hurt Me Plenty (HMP) and Ultra Violence (UV) skill levels. The door to proceed further is located in the east of this area but is locked. To unlock, face west and press a recessed switch located near the entrance. After this, head east to get through the door before it closes.

Stop once you are through the door; once you climb the stairs the floors in the next room will rise to reveal several chaingunners. Climb the stairs and take the partial invisibility powerup in this room, which will make it harder for the enemies to shoot you. Go through the east door to a hallway with shotgun guys, then head south and west down a curved staircase. Head south down a marble hallway and west at the end. You will pass the yellow keycard - it is not actually required to finish the level, but may save some time later.

Go west down a lift and into an outdoor area. If you face east you will see two alcoves containing knights. Be careful as once they leave the alcoves they can teleport to random points in the area. Once they are dead, enter the southern alcove and press the switch inside. This will temporarily lower a barrier between the fences to the north. While the barrier is lowered, you can make a running jump from here into a fenced trench.

If you manage to get into the trench, go north and take the blue keycard. You will be teleported to a pad in the starting area holding a berserk pack, next to the blue door.

(If you miss the jump but remembered to take the yellow key, you can go through the yellow door to the south to get back up to the upper floor. Otherwise, you will have to make the trip around the west, north and east sides of the level to get back to that area.)

With the blue key collected, open the blue door in the north-east corner of the starting area. Go up the stairs into a large marble room. Turn right to the balcony overlooking the starting area and step into the exit teleporter.

The door to secret #1 cannot be opened, as the MARBFACE texture which must be pressed to open it was removed while converting this map for the PlayStation. Consequently, it is only possible to reach 50% secrets in this level.