(Redirected from MAP29: The Living End)

MAP29: The Living End is the twenty-ninth map of Doom II. It was designed by John Romero and uses the music track "Shawn's Got The Shotgun". The par time is 5:00. 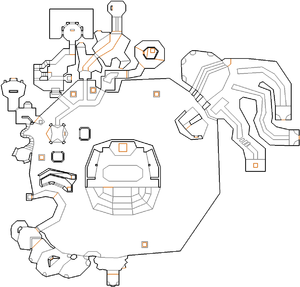 Start by walking forward between the two torches. A platform should lower to a larger ledge that is at the southern end of a great indoor lake of blood. If you fall at any point, there are a few teleporters on the bottom to take you back up. See the map for the five orange squares inside grey ones.

Turn right and press a switch on the wall. A walkway will rise, connecting the ledge to an adjacent one. Use the walkway to reach the new area. Go past the structure in the middle of the ledge, proceed to the corner at the end and turn around. A door will have opened in the structure, revealing a skull switch. Press it, and the wall at the end of the ledge will lower. Go into the area and turn right. You will now be on a walkway that leads to the first teleporter. Past the middle part of the walkway, a couple of barred windows will be exposed up in front of you. Beware the chaingunners that are able to shoot from behind them.

At the other end of the teleporter, you will be in a small room with an open front. Walk out to find yourself on a very narrow ledge. Walk up it, being very careful not to fall off. Once at the top, go around the corner. Walk up to the square block on the precipice and turn around. A door will have opened in the corner of the room. In the new area, go around the central wall, deal with Hell knights and press the switch in the back. Now go back outside and you will notice the block will have lowered. Make a run out onto the tower and press the switch there. A walkway will slowly rise. Also be aware that two doors containing cacodemons will open in the other two towers around you.

Once the ledge has risen fully, go to the middle one of the three openings. You will now be looking across a pit of lava. Walk across the pit to a skull switch. Hit the switch and run backwards a bit. If done right, you will be on a rising walkway. Go across it and into a second lava pit. Run around the corner to your right and press the skull switch there. It will raise a narrow walkway across a third lava pit. Then go to the opposite end of the current pit and press the other skull switch. Run back a little as you did previously and you will be on a new walkway. Go to the end of it and walk across the third walkway to a room with a switch. Hit it.

Notice that if you could not reach the rising walkways, you can lower them from both sides as lifts. The walkway on the third lava pit will remain solid, but you are able to lower the southern wall of the pit to escape if you fall.

Return to the walkway over the blood lake and go to the door closest to the tower with the switch. Staying on the same floor, walk to the end of the wooden hall and turn around. There will be a skull switch on the wall for you to press. Turn around again to see that a platform has risen. Now, you may either go around the corner and take the stairs up, or simply lower the raised platform by pressing on it as it works as a lift. You can now confront an arch-vile and press the switch up at the northern end of the area. Notice that there is a berserk pack behind the switch bar. After the switch has been pressed, go halfway down the stairs and turn left. Go across the new walkway into a small chamber and press the switch in there.

Make yet another return to the forking walkway. Proceed to the third opening at the end of the walkway. Once inside, open the door. There will be a round wooden structure in the middle of a little loop. A baron of Hell guards the area and can utilize invisible monster teleporters. They allow him to appear behind you so be on the lookout for his attacks. The western wall of the structure has scratches on it. It is actually a door. Go in and take the teleporter.

You will now be in a relatively large room with a set of wide, shallow steps in front of you. If you play on Ultra-Violence or higher, the arrival to the new area will be considerably intense as two revenants will attack as soon as you have appeared. In addition, there are a lot of zombiemen in the room, but you may actually use them as cover from the revenants' missiles if you have enough health to bear rifle shots for a moment.

Walk up to find three ledges on a pool of lava. Run onto the one farthest to your right, but rather than proceeding, turn yet right. You will see an tower-like structure with a satyr switch. Run to it and press the switch. Travel to an upper floor with the nearby lift and jump back to the room with the ledges. The next routine works for both the far left and the middle ledge, and the order does not matter. Run onto the end of a ledge, being careful not to fall off, and press the switch that is found. Now, go back to the start of the ledge. Drop into the lava and quickly take the lift at the northern corner of the pit to get back up. Once both ledges have been done, go back onto the one on the far right. Run across the gap near the end and take the teleporter.

You have finally reached the section in the middle of the lake of blood and will be at the base of a winding stairway. Go up, again being careful not to fall off. Once at the top, run quickly past the pit at the center of a platform. It will rise, revealing a monster that may be a mancubus or a cyberdemon, depending on your skill level. Whether you choose to evade or kill the monster, run to the red square pit at the far end of the platform to proceed to the final level of the game.

This map has one box of rockets, but no rocket launcher anywhere in the map.

All of the teleports in the large blood area that span most of the map have their light level set to 255, but their ceiling texture is the same as the surrounding area. This leads to the game rendering five very bright areas in the ceiling above those teleports. This does however help the player see where the teleports are when one cannot see the floor. The bright ceiling could have been hidden if the height was set much higher and there was no upper texture between them and the surrounding area.