MAP29: Ticket to Eternity is the twenty-ninth map of Plutonia 2. It was designed by Adolf Vojta (Gusta) and Pavel Tvrzník (Pipicz), and uses the music track "The Hunt" by Jamie Robertson. The par time defined in MAPINFO is 5:00.

Ticket to Eternity was featured in Doomworld's Top 100 Most Memorable Maps, placing 76th. 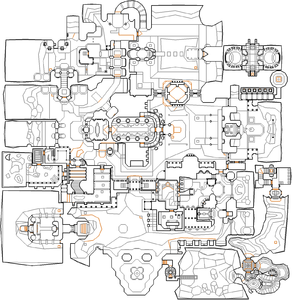 Map of Ticket to Eternity
Letters in italics refer to marked spots on the map. Sector, thing, and linedef numbers in boldface are secrets which count toward the end-of-level tally.

This is the largest level in Plutonia 2, with a vast number of places to go. You need the three color keys to proceed with the level, and you can get them in any order you wish. As you are doing so, there will be lots of monsters standing in your way.

The large chapel in the center of the map houses the red door. North from there, head through the passageway with red rocks until it forks left to a BFG9000. Grabbing it triggers a wall behind you with revenants and an arch-vile inside. There is also a switch here, which raises the bars on the opposite end of the passageway. Go through and kill the cyberdemon that appears up ahead, then press the next switch to open the next set of bars. After that, open the door to the east. You will actually end up in the exit area, so kill any monsters you find here, but notice that there is an open passage to the north. Follow it as it curves around and use the lift at the end. Ride it up and then get the soul sphere at the end of a metal beam. You then need to jump across to the platform, then walk over the next two beams to the other ledge. Open the door on the other side and climb the steps, then head back outside and you should find a switch with red bars around it. Press it and drop to the west. The red bars blocking the staircase here will be lowered, so climb the steps and you will obtain the red key.

You need to head through the large chapel in the center to get the yellow key, but there are red bars blocking the red door. In order to open them, head west of the chapel entrance, to an area where demons may have ambushed you earlier, and then head south. Open the door to your right, then climb the steps and kill the mancubus in this room. Open the next door, and in the small yard that follows, kill the enemies and press the switch at the northwest end. Climb the steps and open the door. Head south, then east, and you will be surprised at the gibbed corpses that appear right away. Follow the trail of corpses and use the bookshelf to lower it and the subsequent wall. Now you need to jump out and land on the ledge, where the switch you find finally removes the bars in front of the red door. Enter the chapel and kill the barons of Hell and arch-vile inside, then kill some more arch-viles through either door. Both doors have paths intersecting at a super shotgun, and a door which leads to the yellow key.

The blue key is in the southwestern part of the map, close to the key doors. To reach it, head into the southwestern building. The massive doors open and an arch-vile awaits on the other side. Several monsters are present in the next room you come to, including a spider mastermind, another arch-vile, a baron of Hell, some revenants, and some chaingunners on the rooftops. You need to get onto these rooftops, and that can be done via the skull switches up the steps. Ignore the center one for now, and press either the left or right switches to raise a nearby lift. Ride it up to the roof, then proceed towards the switch and press it. Drop down and do the same thing, this time on the opposite side. Now press the center skull switch to use the lift directly behind you. Ride it up, kill the lost soul, and head towards the void to teleport onto the blue key. When you drop off the fountain, be wary of the teleporting monsters.

When you have all three keys, head for the southern part of the map where the three key doors are and open them. Get the berserk pack and climb the spiral staircase up to the top. Kill the revenant and walk on the planks, dropping down a gaping hole all the way to a new hellish section. Simply follow the path, opening the door with the arch-vile in it then taking the right door (the left gives you a megasphere if you want one). In the valley that follows, kill the chaingunners and pain elementals, then approach the door for it to lower with a cyberdemon on the other side. Step on the platform to appear in an area with Wolfenstein SS. Kill them and take the door, heading down the stairs to a teleporter with an arch-vile on it. Taking the teleporter, you will wind up in a room just south of the exit area, possibly telefragging a spider mastermind if you had not killed it previously. Kill all the enemies that are in the exit area, and then, head into the western part of the exit area and the door should be open. Since the gaps between the platforms leading to the exit are quite wide, you will have to straferun to reach the exit.

To the left of the start is a hallway with six windows, each containing a Commander Keen and a shoot-to-activate switch. However, at the start of the level only one Keen is open to kill; the other 5 must be opened by finding and killing 5 more hidden Keens scattered throughout the rest of the level. The Keens' locations are as follows:

Once the player has found (and killed) the 5 hidden Keens and activated all 6 switches, the chamber at the end of the hallway will open. Inside is a teleporter to a secret chamber with a "thank you" message from the developers and a list of level design and music credits, as well as three supercharges and several health bonuses.

The exit is the gullet of the dragon's mouth in the northeast of the map. Although you can plainly see it, there is a door in your way which doesn't open until you pass through "The path through Hell" in the southeast (which requires all three keys to reach). However, you can also lure an arch-vile out of the curved tunnel in the north-center, and arch-vile jump your way to the platform just beyond the door. (You must straferun to make your way up, the gaps are too big otherwise).

Because you need the red key to reach the yellow key, and the blue key is closest to "The path through Hell", it might be advisable to get the red, then yellow, then blue keys when performing a UV Max run.

* The vertex count without the effect of node building is 8686.