MAP29: Twilight Descends is an exclusive map which appears as the twenty-ninth level in the Ultimate Doom episode of the PlayStation and Saturn versions of Doom. This map contains a secret exit leading to MAP57: The Marshes. 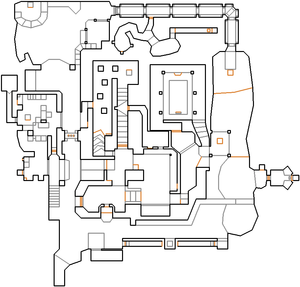 Map of Twilight Descends
Letters in italics refer to marked spots on the map. Sector, thing, and linedef numbers in boldface are secrets which count toward the end-of-level tally.

Grab the health bonuses and drop to the outside area. Turn left and walk up on the stairs. Enter the door ahead to enter a cargo room. Go to the northwest of the cargo room. Notice a lone brown crate. Walk around it and press a skull button located on the southern side of it. This will build the stairs leading to the top of another crate. Walk up on these freshly built stairs. Now, jump over numerous crates to get to the southern part of the crate room. In the very south portion of this room, you can see the blue skull key located on grey crates. Also, notice a small grey crate located in the southwestern corner with shotgun shells on the top of it. Step on this crate to lower the blue skull key. Grab the key. You can also press the skull switch near the blue key crates to open a wall nearby. Behind this wall is a teleporter. Use this as a shortcut to get back to the northern portion of the crate room.

Backtrack from the crate room to the outside area. Near the stairs leading up, open the blue door. Inside, walk upstairs. Go to the north of the room and lower a lift to get higher. From here you can notice the red skull key. It can be obtained from that side. However, you need to build the stairs up that lead to this key. To do that, first enter the door to your right. You now need to press four switches located in various places here. Each switch will partially build the staircase for the red key and can be pressed in any order:

When the stairs are made, lower the lift near them and walk up on them. Turn left and grab the red skull key. Backtrack to the outside area through the blue door.

Near the blue door, go all the way north to the red skull bars. Open them and proceed north. In the nukage area, walk upstairs. In the dark room, drop on the platform north in the nukage area. Here, walk up the stairs leading northwestward. Press the skull switch. It will lower both the key pedestal and a path for proceeding further. Grab the yellow skull key.

In the nukage pool area where you have grabbed the yellow key, an entrance leading to the mines is open now (east). Go to the northeast of the nukage area and enter these mines. Go to the very east cleaning the place of the enemies. Turn right and go south to an open area. Between two torches is a teleporter underneath. If you enter it from the northern side you will find yourself in a place with numerous health bonuses and a megasphere. You can see a cage in this area. Go past it and enter inside to the west. A wall will open. Eliminate several shotgun guys and head into yellow door. Turn left and go to the north of the corridor. Dispatch the barons of Hell and press the switch in the nukage place. A wall is open in the southeast in the corridor. Go there. Walk upstairs and drop. Turn left and enter a caged room. Enter a teleporter. Turn left here and open the door requiring yellow key. In the exit room, head into watery exit pool.

In the northern part of the map, you proceed through the mines path after the nukage pool area. In these mines, when you meet the second pair of wooden pillars, turn right and open the wooden wall south. Inside, go left (east) and clean up the room of imps first. Backtrack and use the path to the right (west). Dispatch the baron of Hell. Notice three torches in this room. Press use on the southern one to lower a platform. Quickly, backtrack to the room full of imps. Step on the lowered platform to the north of the room. If you are too late, get back to the room with three torches and repeat. Turn right and head into teleporter ahead marked with exit sign to get to MAP57: The Marshes.