MAP29: hazmat hazama is the twenty-ninth map of Japanese Community Project. It was designed by Toooooasty and uses a custom music track. The par time defined in MAPINFO is 5:00.

The map makes strong use of the glitch theme, showing a warped or bugged architecture that interposes itself, creating different breaks between areas, which results in the sensation of advancing through a level that breaks between different areas or sectors. Hazmat is a term used to describe hazardous/toxic materials, while Hazama translates to 'Gap' or 'Space Between', referring to the gaps of visible skybox between each of the pieces of map architecture. 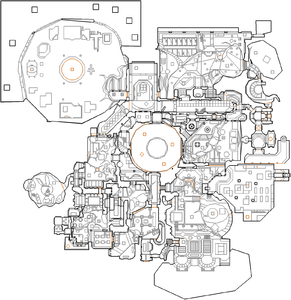 Map of hazmat hazama
Letters in italics refer to marked spots on the map. Sector, thing, and linedef numbers in boldface are secrets which count toward the end-of-level tally.

* The vertex count without the effect of node building is 9171.