MAP30: 3 heures d'agonie 3 (English: Three hours of pain 3) is the thirtieth and final map of 3 heures d'agonie 3. It was designed by Franck Livolant (franckFRAG), JC Dorne and William Huber, and uses the music track "The Forgotten God," originally composed by Tristan Clark for the Revolution! MIDI Pack. 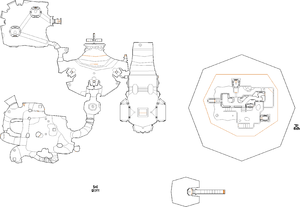 Map of 3 heures d'agonie 3
Letters in italics refer to marked spots on the map. Sector, thing, and linedef numbers in boldface are secrets which count toward the end-of-level tally.

* The vertex count without the effect of node building is 3066.

The final boss's alert quote is taken from the European version of the Nintendo 64 version of Hexen.