MAP30: DM6 is the sixth deathmatch map of Doom for Game Boy Advance. The author of the map is unknown. 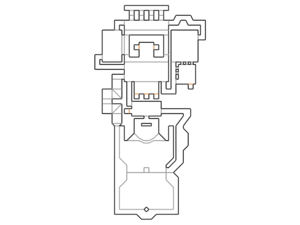 Like the other seven exclusive Game Boy Advance deathmatch maps, this map can only be accessed in multiplayer mode while a Game Link Cable and at least one additional system with its own copy of the game cartridge is attached to the Game Boy Advance. It is intended exclusively for deathmatch. As such there is no exit switch, and the level can only be left when a player reaches the frag limit. There are no monsters, though uniquely amongst this set of maps, a single-player mode spawn point is present for player 1.

Play focuses around a set of teleporters near the center of the map where the rocket launcher can be found. These teleporters take players to virtually any part of the map, including the blue armor pillar, the high alcoves with a soulsphere and a berserk pack, and the chaingun area. Tight corridors and a low frame rate make agile play difficult, and like the rest of the maps in the series, movement is overly restricted by one-way passages and nearly disconnected map areas. This can encourage camping and sniping tactics, with the shotgun bunker across from the blue armor pillar seemingly purpose-made for such.

* The vertex count without the effect of node building is 309.