MAP30: Darkness Without End is the thirtieth map of Speed of Doom. It was designed by Darkwave0000 and uses "Baron's Province", an original track by James Paddock. 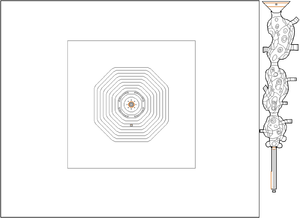 Map of Darkness Without End
Letters in italics refer to marked spots on the map. Sector numbers in boldface are secrets which count toward the end-of-level tally.

After descending the river of lava at the beginning, which gives an opportunity to collect most of the weapons in the game as well as a megasphere, entering the teleporter at the end will bring the player into a small metal box with a face switch which must be shot in order to activate and escape. Upon firing a weapon, the player will hear that an innumerable amount of monsters have awakened, and will rise up near a tall tower flanked by red brick ramparts, which is the only discernible structure in the middle of a vast expanse of black void.

There are already over 2000 monsters on the level at spawn, including as many as 27 cyberdemons. A large number of boss spawners within the tower are sending out spawn cubes at a prodigious rate, adding thousands more within minutes.

The only strategy available is to survive until the central tower lowers, a process which takes a little less than three minutes. Numerous megaspheres, an invulnerability sphere, and an enormous amount of ammo are placed between the tower and its ramparts. In order to not be immediately overwhelmed, particularly by the incredible number of barons and Hell knights which await just outside the boundary of the void, it is necessary to start making excursions out of the central structure to kill as many monsters using the BFG9000 as possible, and then retreat for powerups and more ammo when necessary.

After the arena has been survived for the required amount of time, the central tower will fully descend, revealing a Romero's head, the destruction of which is the only means to exit.

The ending text afterward implies that the Doomguy dies anyway, however, sacrificing himself in order to hopefully destroy Hell forever. The ending expresses an attitude of cynicism toward the idea that this is really the end, however.

The void itself, a pitch black expanse, does damage to the player constantly if entered. For this reason, it is best to restrict battle excursions to the lighted area in the center. It may become necessary to briefly enter the void at times, particularly if arch-viles spawned by the boss shooters are hiding just outside of reach, sniping the player.

By timing a shot of the fist weapon while crossing the teleporter from the lava river into the main arena properly, it is possible to activate the metal switch and raise up into the main arena without awakening most of the monsters in the void, who face away from the player. Some imps and monsters spawned by the spawn shooters will still awaken however, so this wins only a brief respite. Once stray imp fireballs manage to awaken any of the surrounding cyberdemons, it will shortly become necessary to start fighting monsters. Use of this strategy still makes the map significantly easier, however, by shortening the amount of time that must be survived in the midst of battle.

In ZDoom and other source ports that incorporate code from Heretic and Hexen, this trick can also be accomplished using projectile weapons with a firing delay, such as the BFG, as projectiles are allowed to activate gun switch line specials in those games.

* The vertex count without the effect of node building is 1710.