MAP30: Dis is the thirtieth and final map of Unholy Realms. It was designed by Brian Knox (Snakes) and uses the music track "Lucifer's Throne," composed by John Weekley (PRIMEVAL). 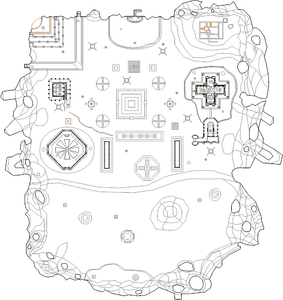 Grab the goodies from the three mancubi and hotfoot it through the teleporter.

Turn left and head to the western building, hitting the switch inside to allow access to the BFG9000 at the top of the large cross-shaped steps to the south. Grab it if necessary - it will help clearing the hordes blocking your route through the map and in no small part help preserve your sanity when tackling the steps that follow.

Navigate to the southwest building, flip the switch inside, and ascend the wooden stairs to another switch to press, then negotiate the platforms to the yellow skull key.

Exit the building and turn left, running to the furthermost southeast building and ascending the elevator. Hit the two switches inside this building, and cross the bridge to the cross-shaped building north of it. Run around the outer perimeter of this building until you come to a door on the opposite side.

Once inside, kill all the enemies, including the baron of Hell who is stalwartly filling his duty as a door made of muscle. Hit the two skull switches opposite each other as quickly as possible in order to navigate into the pillar in the center. Press the gargoyle switch once you are inside, then the lion face switches to let yourself out of the pillar - again, as speedily as possible, as the lift to the baron's perch will only lower temporarily, requiring you to repeat the sequence if you miss it, and possibly shave a few minutes off your lifespan as the wrathful tide of red will begin to billow behind your eyes.

Once you've wunched the skull switch the baron was guarding, run out of the building and leap across the moat (be very serious with this jump so you don't wind up in the lava) to the wooden structure on the other side. Navigate this structure, hitting the switches to lower its various walls and killing the monsters as you go (running clockwise around it as the walls lower is perhaps the best solution) until you are rewarded the blue skull key (and a cyberdemon, because nothing is sacred in this world God long forsook).

Run to the northwest. Cross the red bridge, and ascend the giant steps using the elevators provided until you come to the red skull key. Run from the cyberdemon, for he is vengeful.

With all three keys finally acquired, run to the south. Hit the brown skull switch at the top of the red cross-shaped steps to lower the BFG9000's platform. Run toward the north-east until you come to a teleporter that this switch has also lowered. Stepping onto this teleporter will take you to the western building. Ascend the outer perimeter of this building until you reach the two sets of skull bars, blue and red. Take a leap of faith off the platform behind these bars with your rocket launcher ready - you should land on a wooden platform with a teleporter on it - or not. It's a bit of a gamble, really. You can very easily overshoot or simply miss it entirely, thereby plummeting further into an ever more tortured state of mind.

Once you've successfully reached the wooden platform and teleported, you will find yourself balanced precariously on a lowering platform opposite the Icon of Sin, hopefully without a squadron of lost souls trying to furiously make out with you. Plunge two or three rockets into the icon's brain. If you miss these incredibly vital shots, you will have to revisit the BFG9000 platform and repeat the aforementioned sequence of steps all over again until the heat death of the universe, or until the merciful jet-blackness of brain death besets you, whichever one comes first.

Should you succeed in rocketing the icon's brain enough times, you will quell the wrath of the god that salvaged this squalling beast of a map from the festooned depths of the boiling Styx, and also beat Unholy Realms.

You will also have to do all of this with a few hundred monsters constantly bearing down on you - and with more unendingly spawning upon the glowing pentagrams littered throughout the map.

* The vertex count without the effect of node building is 6168.