MAP30: Electric Nightmare is the thirtieth and final map of Valiant. It was designed by Paul DeBruyne (skillsaw) and uses the music tracks "End Credits" from Thunder Force IV and "Antarctic" from Gundam Wing: Endless Duel. The par time is 6:00. 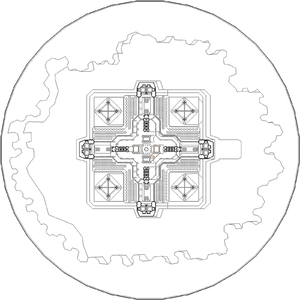 Map of Electric Nightmare
Letters in italics refer to marked spots on the map. Sector, thing, and linedef numbers in boldface are secrets which count toward the end-of-level tally.

Head straight forward through a pit of medikits to find a super chaingun and shotgun in front of a switch, then flip the switch to open a path by the starting point leading to the east side of the map. Grab the large ammo pickups in the pit here, then walk east to collect a rocket launcher and a backpack in front of a second switch that will open the path to the south side, as well as revealing a plasma gun. Proceed to the south side to find energy cell packs and boxes of rockets, grab the chainsaw and super shotgun then flip a third switch on the south wall to open a path to the west side, as well as revealing a megasphere. Go to the west side and head to the far side to flip one more switch, then head east into a red teleporter that is revealed to go to the final battle.

In front of you is an invisible platform holding the super vile; step forward and it will lower. The super vile has 7,500 hit points and possesses largely identical behavior to a normal arch-vile, but when it launches an attack it will unleash several blasts at a time that can kill you even with maximum health and armor - if you see it prepare an attack, quickly hide behind an obstacle and wait a few moments before leaving cover. As well as dealing with the super vile, you must avoid plasma rounds being fired from the lightning orbs above the arena, as well as various monsters that are released into the arena from compartments. The super vile will retaliate against monsters that hit it by accident, so you may want to keep them alive for as long as possible.

Once the super vile is killed, wait for four red X teleporters to lower around the center of the arena then step into any of them to finish the game.

This level will not work correctly with any mods that replace the blue torch decoration, because the super vile replaces that object.

Source ports that rely on the DEHACKED lump will not display the boss correctly, because the code pointer A_VileChase will always play the regular arch-vile resurrection states. This leads to the boss appearing like a regular arch-vile after resurrecting. This is only a graphical bug as the rest of the level plays normally.

* The vertex count without the effect of node building is 12901.