MAP30: Fire and Ice is the thirtieth and final map of Scythe. It was designed by Erik Alm and uses the music track "You Suck!" from Rise of the Triad. 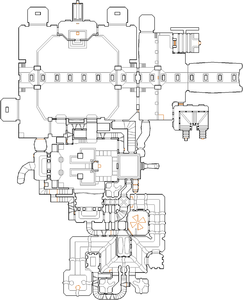 Map of Fire and Ice
Letters in italics refer to marked spots on the map. Sector numbers in boldface are secrets which count toward the end-of-level tally.

Not really a bug, but a warning. Due to the fact that the normal safeguard against telefragging by monsters is disabled in this level, if this level is played on either nightmare difficulty or with the -respawn parameter set, monsters may telefrag the player if they respawn at the exact coordinate of the player at any height. This will occur even if the player is invincible by the means of the god mode cheat or the invulnerability powerup.

Basically this map can be finished with just a pistol, however note that it is an extremely difficult route. And do not shoot at all until you get the yellow key.

At the start, just go down and press the switch on the left and lower the door which will reveal a cyberdemon. Go around and go straight up the stairs ahead, avoid the cyberdemon on top and jump off and go into the small building. Press the switch right next to the megasphere, and go outside. Avoiding revenants, go up the stairs that look exactly like the ones at the start. This time, jump off the ledge and go where all the mancubi are, and go into the small building again. Try to get the barons collected in one side, or they will block you. Get the key, but don't jump off, just turn around. Go to the room behind the stairway (not at the start) and follow the stairs. Avoid Hell knights and the arch-vile, go straight and open the yellow door. Press the switch, get back out, and while the yellow pillar is lowering just keep running into it. Once you are able to climb it, go straight up and climb blue and red ones and fall down to see the Romero's head. Go around it and kill with the pistol.

A trick makes it possible to skip most of the map; out of the three colored barriers that block the way to the Romero's head, only the first, yellow one need be opened. It is possible to both climb the three barriers like stairs by running over the yellow barrier while it's lowering, or to perform an arch-vile jump past the two latter barriers once the yellow one is opened. Therefore two of the keys are unnecessary.

* The vertex count without the effect of node building is 2927.