MAP30: Game Over is the thirtieth and final level of Going Down. It was designed by Cyriak Harris (mouldy), who also composed the music track, "Zombie Goes Shopping." One can mistakenly think that this level is an easter egg. In fact, this is a regular level that should also be completed. 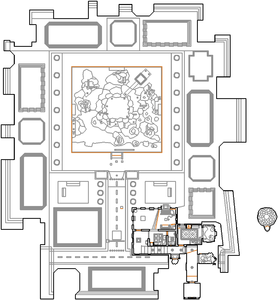 Map of Game Over
Letters in italics refer to marked spots on the map. Sector numbers in boldface are secrets which count toward the end-of-level tally.

Head left into the door and go down the stairs. Open the green door to enter bedroom. Press use on the television set. This will open two cupboards, one of them is in this room. Take the super shotgun in this room to be your essential weapon. Enter the opened cupboard. You will be teleported into the bathroom. From here, leave via the door and return to the initial room where you have started. Near the door press on the unnoticeable green button. Take freshly spawned red key.

Soon, the final boss will start to spawn random monsters into various areas in the house. Leave this room and walk down the stairs into the familiar corridor. You now should make your way into the white door leading out of your tenement. However, you cannot open it. You need any monster to open it from that side. Waiting may be either short or long depending on how many monsters are spawned in that side. Repulse other monsters' attacks while awaiting.

When the door is finally open, enter it and head into the lift requiring red key. Press the switch to go down. The lights start fading out and you finish this level.

* The vertex count without the effect of node building is 5123.