MAP30: God Machine is the thirtieth and final map of Sunlust. It was designed by Zachary Stephens (Ribbiks) and Daniel Jakobsson (dannebubinga), and uses the music track "Retribution Dawns" by Aubrey Hodges from PSX Doom, sequenced by Jay Reichard (silentzorah). 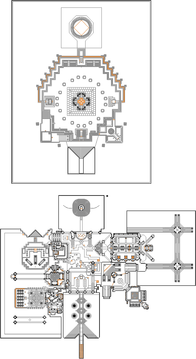 Map of God Machine
Letters in italics refer to marked spots on the map. Sector, thing, and linedef numbers in boldface are secrets which count toward the end-of-level tally.

Press the switch just ahead to lower the bars. Head to the right and stand on top of the yellow platforms. This will lower a path to the west that leads to stairs. Press the switch just downstairs, then drop into the room and head south. Find another switch in here, which will lower some weapons and a backpack. Ahead of these is a room with a megasphere, guarded by crushers. Take the lift nearby and pick up the armor bonus, which will gain access to the first fight of the map, relying on resurrected enemies and heavy use of rockets.

A switch to the east of the arena has lowered and will reveal another switch guarded by arch-viles. This switch will allow you to leave the arena, but more monsters will be resurrected in these other rooms. A nearby lift will have been revealed to return to the starting area, with the teleporter in the center lowered. Take this teleporter to the slime area below and hit a switch to the southeast, allowing access to the nearby stairs. An optional encounter containing the super shotgun is to the left, but is almost critical to finishing the level. Follow the stairs to the right, drop down when you can, and take a lift to the right (accompanied by a megaarmor). Keep following the stairs up to the northwest balcony. A switch is to the south which will lower the bars, allowing access to the northern part of the complex. To the southeast of this area there are yellow platforms that, when stepped on, will lower two teleporters. The closest one will teleport you to the southeast arena containing the yellow key. On the east corner there is a switch that will open up a teleporter for you to escape. The yellow-key switch to the northwest will gain access to two encounters needed to progress.

The most infamous encounter of the level is to the northeast. Walking to the other side of the arena will teleport you up to a nearby ledge containing the BFG9000. Attempting to jump off will teleport you back to the arena. Walk back to the other side and the surrounding walls will lower, initiating the encounter. A switch to the north will reveal several arch-viles and three more switches that need to be pressed to escape the arena.

The northwest arena is the other encounter needed to gain access to the finale. It consists of chaingunners and cacodemons, which are resurrected if they die close to the walls in the arena. The encounter lasts about 30 seconds before you can exit.

After completing both encounters described above, the northernmost end of the complex will be accessible -- a teleporter that will take you to the entire second half of the level. When you have most of the initial enemies in the arena cleared (namely the revenants, mancubi, arachnotrons, and some arch-viles), there are two closets to the east and west that need to be opened up, both of which will take you to small side encounters. Completing them will allow access to the "big button", a switch housed in the southern closet (filled with arch-viles). This switch will initiate the penultimate fight with a cloud of pain elementals (or cacodemons on HNTR or lower) and a large horde of revenants, Hell knights, arch-viles, and cyberdemons on the other side. Behind them will be a switch that will kill the turret enemies (if playing on HMP or higher) and allow you to enter the central structure. Inside the building, when picking up the megasphere in the center, will be a frantic duel against pairs of arch-viles (or an arch-vile and baron in each closet on HMP or lower). After this, the walls will lower. Head north and step into the helix.

* The vertex count without the effect of node building is 27877.

"[R:] A monster map to close out the set, an ominous twisted complex of metal and black ooze. No shortage of demons so long as this place is operational, shut it down and claim another victory over Hell. Good luck!

[D:] The magnum opus. The northern area was the first thing we made for this. We wanted to have a huge ending fight for the whole megawad as closure. To get that feeling of relief and reward, you know. We decided Ribbiks should make an adventurous start of the map with some puzzle solving and pretty architecture. Of course, he ended up making the most insane and huge structures... I like it though, that's what made us work together in the first place. When you hear Romero scream, it's over. Hope you enjoyed it."
― sunlust_extra_info.txt