MAP30: HUB is the thirtieth and hub map of Doomworld Mega Project 2016. It was designed by TimeOfDeath.

In ZDoom-based source ports, this map is loaded first upon starting a new game. It functions as a level selector, consisting of a single room with 49 billboards covering the outer wall, each one featuring a screenshot of its corresponding map. Walking through a picture will take the player to the respective level. Upon beating each level, the player will be returned to this map. 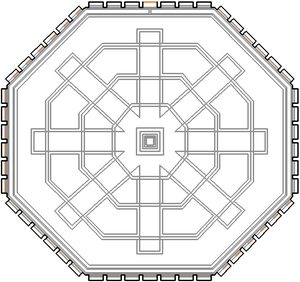 Map of HUB
Letters in italics refer to marked spots on the map. Sector, thing, and linedef numbers in boldface are secrets which count toward the end-of-level tally.